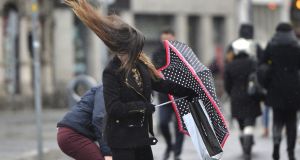 A status yellow wind warning has been issued for a number of western counties. File photograph: Alan Betson/The Irish Times

A status yellow wind warning has been issued for a number of western counties until Tuesday morning.

The latest warning comes as hundreds of homes and businesses along the west coast remained without power on Monday afternoon after Storm Bella hit Ireland over the weekend.

The storm struck Ireland on Saturday night and early on Sunday morning with rain and strong winds in many places.

Premises in counties Cork, Kerry, Tipperary, Mayo, Limerick and Donegal were still without power on Monday afternoon, with clusters of power outages along Ireland’s western coast.

In Ballyhaunis, more than 260 ESB customers had no power on Monday afternoon, with more than 200 homes and businesses around Kilgarvan also without power. More than 100 customers based around Kenmare in Co Kerry had no power by 3pm on Monday, while another 175 had no power in Gurranebane.

Here is the latest cloud and rainfall forecast from our HARMONIE weather model. It covers the period from now until 12:00 Wednesday.

More weather forecast information for the upcoming days and outlook period can be found here:https://t.co/9gKN6SVok4 pic.twitter.com/GbMGX2tbTy

An ESB spokesman said the network had experienced a “normal, blustery evening for this time of year” on Sunday and that ESB crews had been “mobilised to repair any faults to the network”.

Met Éireann warned that northwesterly winds associated with Storm Bella could reach mean speeds of 50-65km/h with gusts of 90-110km/h. The combination of strong winds, high waves and forecasted storm surge could also lead to coastal flooding, warned the forecaster on Monday.

A status yellow wind and ice warning affecting counties Antrim, Armagh, Down, Fermanagh, Tyrone and Derry expired at 10am on Monday.

Monday night will be cold with frost and icy patches in some areas, while Tuesday will see sunny spells and scattered showers with a chance of snow in some parts.

AA Roadwatch advised drivers to take care on wet and frosty road surfaces which make it difficult to slow down and brake. Road users should also expect wind-blown debris on all routes and give extra room to other road users, especially pedestrians, cyclists and motorcyclists, said AA.

In Co Kerry, diversions were in place on the Tralee/Ballybunion Road just south of Ballyduff at the turn-off for the Causeway as emergency services removed a fallen tree, while more fallen trees were cleared from the N70 Ring of Kerry between Kenmare and Blackwater, according to the AA newsroom. A tree has also been cleared on the N86 between Camp and Dingle.