More than €4 million dedicated to conservation of endangered Corncrake 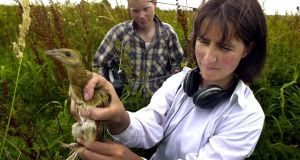 More than €4 million has been dedicated to the conservation of the endangered Corncrake bird in Ireland.

A specially protected species, the Corncrake is a visitor between April and September but its number has dropped by 85 per cent since the 1970s.

Once a common sight in the Irish countryside, the species is now limited to Connacht, Donegal and their offshore islands.

“Supporting Corncrake in these remaining strongholds is critical to the survival of this species in Ireland,” according to the Department of Heritage, announcing EU conservation funding of €4.3 million on Wednesday.

The money will be directed to the National Parks and Wildlife Service (NPWS) for a project focused on improving the conservation status of the bird.

“This funding demonstrates the ongoing importance of the EU LIFE programme in assisting national governments to drive forward and support large-scale projects that have a regional or local focus, particularly in rural or peripheral areas,” said Minister Josepha Madigan in a statement.

The EU funding will support a five-year project beginning in January which aims to deliver a 20 per cent increase on the 2018 population of Corncrake by 2024.

The main causes of the dramatic decline in its numbers include the move from hay-making to silage, increased use of fertiliser and the reseeding of semi-natural grasslands.