Heavy rain alert for eight counties – with risk of flooding 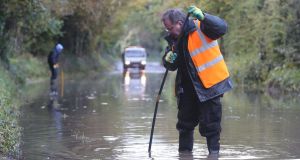 The weather warning will be in place from 4am on Wednesday to 7pm that evening. File photograph: Gareth Chaney/Collins

A status yellow rainfall weather warning has been issued covering eight counties for Wednesday, with a risk of localised flooding in parts of the country.

The warning was issued ahead of expected heavy rainfall that will push northeastwards across the country, with forecast accumulations of 30-40mm leading to risks of flooding.

The weather warning will be in place from 4am on Wednesday to 7pm that evening.

The national forecaster has also issued a status yellow wind warning valid from noon on Wednesday until midnight. Met Éireann expect gusts of between 90 and 110 km/h to hit the southeast of the country, with winds to be strongest in coastal areas.

The forecast for Wednesday is for the heavy rain to start in Munster early in the day and to spread across the rest of the country during the morning. Average temperatures will reach highs of between seven and 11 degrees.

The heavy rainfall is due to clear off into the night with smaller showers lingering around coastal areas. Temperatures are expected to drop to lows of five degrees on Wednesday night, with mist and fog forming in some places.

What about the weekend?

The forecast for Thursday is for dry weather with sunshine in the west of the country, Met Éireann has said.

It will be more overcast in the south and east of the country with some light patches of rain.

The outlook for Friday appears to be for a dry day with some bright spells, but with colder temperatures only reaching highs of seven degrees.

Temperatures are expected to drop later into Friday evening to between one and four degrees, bringing frost in parts of the country overnight.

The cold conditions are set to continue into the weekend with temperatures not expected to be higher than seven degrees, according to Met Éireann.