Snow and ice warning across country extended until Monday

Snow fell on high ground, including the Dublin Mountains, over the weekend 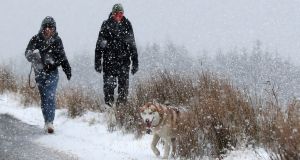 People walk a dog in the snow in the Wicklow Gap, Co Wicklow on Sunday. Photograph: PA

A weather warning for snow and ice for the entire country has been extended until Monday at 10am.

Met Éireann put the status yellow warning in place from 11am on Saturday amid expected wintry showers this weekend.

Snow fell on areas of high ground, including the Dublin mountains, over the weekend.

The forecaster says scattered wintry showers of hail, sleet and snow with some accumulations can be expected this evening and overnight resulting in icy stretches on roads and footpaths.

Highest temperatures will range from 3 degrees in the north to 7 in the south with temperatures lower in areas with lying snow.

The forecaster says there will be strong winds in the south tonight before becoming moderate to fresh westerly everywhere as the night goes on and there will be wintery rain or showers in the north and northwest.

The rest of the country will be mostly dry. Lowest temperatures will range between zero and minus 4 degrees overnight with a sharp to severe frost and ice on untreated surfaces.

Road users are advised to exercise caution on Monday morning.

Monday will see further showers in northwest and western coastal areas, carrying further east for a time in the afternoon, but otherwise it will be sunny.

Highest temperatures on Monday will range between 3 and 5 degrees and winds will be strong southwesterly in the north, light variable in the south.