Lights out at Earth Hour? Don’t waste your energy

The Sydney Harbour Bridge has switched its lights off to mark the 10th anniversary of Earth Hour. The initiative began in Australia in 2007 as a grass roots gesture by the World Wildlife Fund (WWF) to draw attention to climate change. Video: Reuters 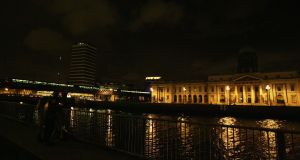 What a turnoff: A dimly visible Liberty Hall with its lights out during Earth Hour 2008. Photograph: Aidan Crawley

Saturday night in some 7,000 cities in more than 170 countries, people will turn off their lights to mark Earth Hour, an event its organiser, the World Wildlife Fund, claims is the world’s largest voluntary action.

Now in its 10th year, Earth Hour has been warmly embraced in Ireland, with lights being dimmed in Government buildings and major heritage sites.

Such symbolic actions on climate change are favourites of our politicians. They allow them to bathe in the glow of feel-good environmentalism for an hour or two – without the awkwardness of having to commit to any tangible actions

Another likely reason for politicians and corporations to support Earth Hour is that it subtly shifts responsibility away from them and back onto individuals. Switch off the lights, don’t fly so often, eat less meat, use public transport more.

In and of themselves, these are all good ideas. But even in the unlikely event they could be scaled up massively, they deflect attention from the reality that the global climate and ecological crisis can be addressed only at an intergovernmental scale. This means binding treaties and strong regulations to massively decarbonise the global economy, rein in overconsumption, stabilise the biosphere, and reduce pressure on biodiversity.

Besides, why should Irish people be expected to consider sacrificing aspects of their lifestyle for a cause their own Government has, for the past six years, done precisely nothing to promote or explain?

As for leadership, Ireland does at least has its first Minister for Climate Action. Then again, Denis Naughten’s recently published draft National Mitigation Plan was panned for its stunning lack of ambition or urgency.

From all this, you might infer that Ireland is a disinterested bystander. But, in fact, we have punched well above our weight in back-pedalling and special pleading for sectional interests at EU level.

Our Government’s efforts, primarily on behalf of the agricultural lobby, have made a small but telling dent in Europe’s resolve to act collectively while there is still time. As government buildings go dark this evening, it might be more apposite as a way of marking our shame at the betrayal of both the developing world and future generations.

The Earth Hour symbolism of turning out the lights as an action against climate change is in itself curious. How much energy we use is important, of course, but lighting is a tiny fraction of overall energy usage, and this has actually declined sharply in the past decade with the widespread adoption of low energy technologies.

What matters most is how the energy is produced. Ireland, for instance, is now increasing the amount of coal-fired energy on the grid via the ESB’s Moneypoint plant, thanks to the low price of coal on the world market.

Cheap comes, however, at a fearsome price. While the ESB and Bord Na Móna pocket the profits, Ireland’s hospitals and GP surgeries bear the human cost of air pollution spewed out by fossil fuel-burning utilities. And that is before the climate damage is tallied.

To add insult to illness, Irish electricity users massively subsidise three loss-making, ecologically devastating peat-burning plants as part of what is in essence a politically inspired job-creation scheme in the midlands.

Earth Hour was first unveiled by an Australian ad agency in 2007, when global atmospheric concentrations of carbon dioxide had reached 385 parts per million, their highest level in some four million years. Since then, CO2 levels have broken through the symbolic 400ppm barrier and continue to rise sharply.

The impact has been stark. Eight of the 10 hottest years ever recorded have all occurred since 2007. Last year smashed all previous records, pushing Earth systems into what the World Meteorological Organisation this week called “truly uncharted territory”.

If homo sapiens really has the wit and ambition to survive this century, from here on every hour has to be Earth Hour.

John Gibbons is an environmental writer and commentator. He tweets @think_or_swim.