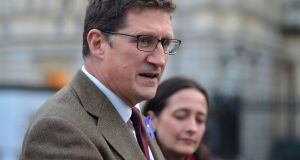 Sinn Féin and Solidarity-People Before Profit have been accused of opposing progressive measures to tackle climate change by refusing to endorse a “carbon fee and dividend” proposal which would benefit the less well off.

The measure is proposed in a climate action report being finalised by an all-party committee, which is due to be published on March 28th.

The measure is a mechanism to shift people away from using fossil fuels, the single biggest source of carbon emissions, and to encourage greater use of renewable energy sources.

Green Party leader Eamon Ryan said on Wednesday, economic evidence had indicated how a fee-and-dividend model of carbon pricing, which returns all the revenue directly to citizens, was cash positive for those on lower incomes and achieved significant environmental benefits.

“What are parties on the left doing opposing progressive climate measures which would benefit the less well off?” he asked.

The ESRI had also presented new modelling analysis to the Climate Action Committee in recent weeks, “which shows that increasing the price of carbon each year up to 2030 along the lines that the Green Party has proposed would not have a negative effect on the economy but would contribute a 17 per cent reduction in emissions by 2030”, Mr Ryan said.

Solidarity-PBP TD Bríd Smith has opposed the measure as she claimed it had not worked in other jurisdictions, while Sinn Féin said it would not support it until other alternatives were in place for those who were dependent on fossil fuels.

Mr Ryan said their position was irreconcilable with their support for young climate strikers who an embarking on a national protest.

“How can they be saying they support the climate strikers this Friday when they are ruling out one of their key demands which is for us to adopt the recommendations of the Citizens’ Assembly. That included support for a price on carbon. It is one of the climate actions we want and need to deliver.”

Speaking at an Irish Wind Energy Association conference, committee chairwoman Hildegarde Naughton said the Oireachtas body report had identified a lot of actions to decarbonise Ireland quickly which had all-party backing, but she feared the carbon tax issue would become the focus of their plan.

Key sectors such as the farming community and hauliers wanted to make the transition but were fearful about how carbon pricing might affect them. This had to be taken on board, she said.

Their report would feed into a whole-of-Government report to be published by Minister for Climate Action Richard Bruton in coming weeks. Both documents needed to set out pathways and clear action to decarbonise, while understanding “the need to move fast but efficiently”.

A whole of Government approach was needed to move away from fossil fuels and to ensure buy-in by communities, Ms Naughton said. It would also require acknowledgment that Ireland was an island with a need to maintain security of its energy supplies, investment in renewable energy and a just transition.

The Green Party is proposing a €20 per tonne increase in 2020 and €5 per tonne each year thereafter with a refund of revenue to each household. Fine Gael supports the fee-and-dividend approach, subject to evaluation of how it would be applied. Fianna Fáil and Labour support setting a rising trajectory up to 2030, but the latter wants revenues to be ring-fenced for climate actions such as retrofitting houses to become “zero carbon”.