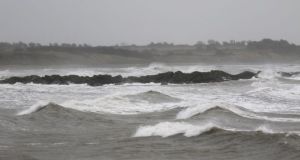 Nearly 2,000 without power after after Storm Gareth made its way across the country. Photograph: Nick Bradshaw

Winds of over 100 km/h continue to batter the west of the country, as nearly 2,000 homes and businesses have been left without power due to Storm Gareth.

ESB Networks has said the majority of affected customers are in the Co Donegal region. Crews are working to restore power to the near 2,000 homes, farms and businesses, cut off due to the high winds from the storm.

“Our robust network performed well during the storm, with ESB Networks crews onsite since first light to restore power,” a spokeswoman for the utility said.

In Clifden, a small town on the Co Galway coast, 636 customers were left without power after Storm Gareth. Other minor power outages were reported in Mayo and Westmeath.

ESB warned the public to avoid electricity wires, brought down by fallen trees during the storm. The wires “could be live and would be extremely dangerous,” the power network warned, advising people to contact the utility if they come across fallen wires.

The status orange weather warning, one rung below the highest grade status red, remained in place until 9am. The Met Éireann warning is in place for western counties; Donegal, Galway, Mayo, Sligo, and Leitrim, due to high winds, which reached up to 130 km/h during the worst of Storm Gareth.

A lower grade status yellow weather warning for strong winds remains in place across the country until midday.

Winds associated with the storm are still reaching gusts of nearly 100km/h in western parts of the country. Met Éireann recorded winds gusting up to 94km/h at Malin Head, Co Donegal at 7am on Wednesday.

Temperatures across the country ranged from five to eight degrees this morning, with reports of rain in places.

AA Roadwatch warned motorists to drive with caution, due to the remaining high winds and wet conditions on roads. Motorists were also warned to watch out for loose debris blown onto the roads, or fallen trees and branches.