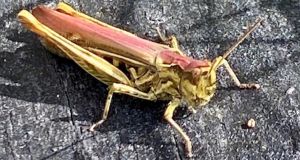 I photographed this fellow on our wooden deck in Wexford. Is it a grasshopper and is it native? –Sara Whelan, New Ross, Co Wexford
Pink grasshoppers are very rare as the colour is caused by a genetic anomaly. A few have been seen in Britain. There was one from Greystones, Co Wicklow, in Eye on Nature last year.

I noticed this insect on nettles at Carrickbrack, Howth. I thought it might be a bush cricket but I couldn’t find it in the books. – Frank Smyth, Sutton, Dublin13
It’s Roesel’s bush cricket, with a local distribution in Ireland.

I picked up this oyster shell, one among many, on a beach near Brittas. It has many holes, sometimes through to the other side. What caused the holes? – Ruth Murphy, Kilcock, Co Kildare
There are a few organisms that cause holes in shells. These ones were probably caused by the boring sponge Cliona chelata.

This moth was camped out on my front door for several days. Is it likely to overwinter? – Paul Kenny, Kimmage, Dublin 12
It’s the garden carpet moth and it overwinters as a pupa.

I took this image of a turtle dove on our driveway. It was my first time seeing one. Is that unusual? – Barbara Kenneally, Allihies, Co Cork
It is a rare sighting. Turtle doves are passage migrants in Ireland, usually seen on coastal headlands on the south and east coasts in spring and autumn.

I found this little yellow moth outside our door. Can you tell me what it is? – Rob Smyth, Foxrock, Dublin 18
It’s the canary-shouldered thorn moth.