Irish tree folklore continues to emerge from the shadows 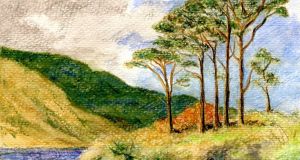 Ireland’s original ‘Scots’ pines were thought to have become extinct about AD 400. The variety above at Doolough, Co Mayo. Painting by Michael Viney

At the height of the wind the birches were whipping the sky and our big beech swayed and curtseyed, its top branches bare above a swirling crinoline of gold.

The only casualty, after all, was the old hawthorn bush outside my workroom window, planted in the field bank a century ago. A gust tore off a whole mossy limb, right down to the root, but left plenty for me to hang the peanuts on.

It made me think of all the other trees that far worse winds will topple from now on – not just lonely hawthorns perched on fairy forts, but the last big old sycamores, ashes and oaks, rooted in sodden ground, with a special place in people’s local love, lore or supplication.

Many of their site legends go back many centuries to fear of the gods, so there’s some irony in the current rush to plant more trees to save the human world from big, awesome and invisible CO2. The sites of “holy” trees that still flutter with rags and rosaries are rooted in a time when people were aware of their proper place in nature.

Popular study of Irish tree folklore was late to emerge from the shade of “big house” trees and posh natural history. In 2003, Irish Trees: Myths, Legends and Folklore by Niall Mac Coitir, a Fingal County Council official of Celtic enthusiasms, was the first of four of similar impulse published within a decade.

In 2009, Trees of Inspiration: Sacred Trees and Bushes of Ireland, with revelatory photographs, was the work of Christine Zucchelli, an Austrian folklorist with a home in Co Clare. In 2012, Ben Simon, a Belfast ecologist and forest officer, followed 6in Ordnance Survey maps across the island to visit and gather his Tales, Traditions and Folklore of Ireland’s Trees.

In 2013 came the big and beautiful Heritage Trees of Ireland, sponsored by the Tree Council. Aubrey Fennell’s sample of “sacred” trees offered yet another view of St Kieran’s Bush at Clareen, Co Offaly, a hawthorn still reliably festooned with rags (prayers to the saint are answered when the last shred of rag has flown).

That feelings come into it is borne out somewhat by “memorial” trees, like several among those that now crowd our own acre. Oaks grown from a gift of sprouted acorns remember Douglas Gageby, late, great editor of The Irish Times. Another, its acorn gathered from an oak outside the European Parliament, recalls the tree-loving Irish Rimes political columnist from Mayo, John Healy. Others have more domestic significance.

Remembering “a loved one” has found a strong place, indeed, in the current urge to plant trees for sound ecological good. The Tree Council, for example, has a sponsorship scheme that, for €60, will plant a dedicated native tree in its wild woodlands, managed “by Mother Earth” in Wicklow and Cavan.

An unexpected gift of three native Scots pine saplings has offered us some hope of posterity. The young trees were grown from seed harvested from a cluster of gnarled and stunted pines at the aptly named Rockforest in the Burren.

Pollen in sediment cores from the Rockforest Lough has confirmed them as genetic descendants of Ireland’s original “Scots” pines, long thought to have become extinct around AD 400. Hundreds of sapling raised from them have already been planted in the national parks at Ballycroy in north Mayo and Glenveagh in Donegal.

Prompted by my mention of the Rockforest trees, they have also been propagated by Bernard Carey, at Mountshannon, Co Clare, a nurseryman who won assent from National Parks and Wildlife Service (NPWS) and the Forestry Service. Sharing the proceeds with BurrenBeo, the conservation network, his advert on Done Deal offers five trees in a bag, delivered for €45.

At 8m high and 4m wide in 10 years, these are not, perhaps, for the average Dublin patio. We have passed our trio, as memorial trees, to young neighbours and friends with an inviting stretch of lawn. They may never reach the photogenic elegance of the iconic but alien group of pines beside Doo Lough, just over the mountain, but they will have better claim to belong.

The Rockforest site now has the status of a native woodland resource. Dr Jenni Roche, woodland specialist with the NPWS, warns that its gene pool is “of high conservation value but its rarity increases its extinction risk”.

She hopes, meanwhile, for national forests of a tree long known as red bones and white, skeletal roots in the cutaway peat of the west.