Kieran Kennedy, a volunteer in Glenties, Co Donegal, says ‘morale is on the floor’ 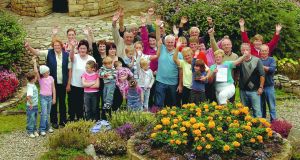 “I think it is going to be very difficult to stop it from unravelling completely,” says Kieran Kennedy, a volunteer in Glenties, Co Donegal, who has worked hard to keep his town spick and span for the Tidy Towns contest.

The majority of volunteers are retired or semi-retired, he says: “If you are at that age, and there is nothing happening for a couple years, it seems an awful long way back to get back to where you were. I don’t know if the older generation will have the energy for that.”

Kennedy is proud of Glenties’ reputation in the contest, having won the overall national award winner five times, along with regular category wins.

The competition has value for towns and villages beyond trophies, he says: “Even though we don’t have tourist attractions, Glenties is a very well-known town. People love to visit, walking through the town and admiring it. When people start to come back, if the town has let itself down badly, that be can a spiral in itself.

“It is the people staying over, stopping for an ice cream or a coffee that keeps the town alive. If it loses that, and the motivation and local competitiveness, the town could deteriorate big time.”

With the cancellation of the contest, “everything froze”.

“The town is the worse for it, particularly a small town like Glenties,” he says, adding that there has been little support from local authorities.

“There are no milestones to work towards. Other events that Tidy Towns would have built towards – like the MacGill Summer School – to have the town looking its best have also gone. Morale is on the floor.

“It is like everything has stood still. I don’t think we will realise the impact of all this until we try to get back to where we were, if it is ever normal again, after a lost year or years.”

Volunteer work is outdoors, so should be safe, says Kennedy, who fears that the consequences of “going in and out of lockdown for the next year or two years” must be countered by community activity.

“It would give something for people to aspire towards. It isn’t going to impact on case numbers if two or three people are going out, socially distanced, and picking up litter and planting flower beds.”