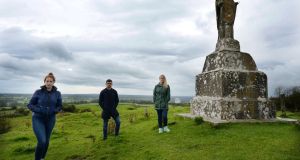 On a clear day, a person standing atop Granard Motte will be able to see five lakes, nine counties and three provinces of Ireland.

Recently, the sod was turned on the land below (known as the Bailey) for what will become the town’s prize attraction, a Norman heritage park. The €3.8 million tourism investment aims to make the Longford town of Granard – which is currently a busy throughway to the north – a place to stop and explore.

However locals fear a proposed 169m wind turbine will cast an anachronistic shadow over their Norman village.

Patrick McGivney (30), who has grown up in the town, believes the industrial structure will undermine years of grassroots effort to develop the area into a destination.

“We are not known as a tourist town, but that is the vision. There are big dreams here,” he says. “Now to see all that work and effort to have that potentially undermined by a structure this size is really worrying.”

“There is a real history here which we are now only really starting to acknowledge fully and celebrate . . . This is something that the people of Granard are so proud of. Finally, we have something to row in behind,” he adds.

McGivney is among more than 30 people who objected to the planning application sought by Kiernan Milling, an animal feed producer, for a single wind turbine in nearby Granardkill.

Longford County Council rejected the proposal, contending that the “renewable and climate change benefits would not outweigh any likely negative visual intrusion” and could have “potential significant negative visual impacts” on Granard Motte, a national monument. Kiernan Milling has appealed the ruling to An Bord Pleanála.

At 169m, the turbine would be nearly 50m higher than Dublin’s Spire and will “dwarf” everything in the surrounding area, McGivney says. “You are not going to see anything but a big industrial turbine,” he adds.

Fáilte Ireland says the structure could “seriously detract” from the value of the heritage assets of the area. The tourism body has “serious concerns” about the siting and scale of the proposed development, located about 1,500m from Granard Motte and Bailey.

Of significant concern to Granardkill resident Judy Sheridan (35) are the potential health effects of living near a turbine. “The idea of living under this with the noise and the shadow flicker is so worrying. It has really stressed out a lot of people,” she says.

The World Health Organisation reports there is “very little evidence” about adverse health effects due to continuous exposure to wind turbine noise. As for shadow flicker – where the turbines cast a moving shadow when the sun is low in the sky – the Health Service Executive says there is “insufficient direct evidence” to draw a conclusive link with health effects. However, new draft wind energy guidelines published by the Department of Planning, Housing and Local Government advise careful design to ensure no properties will be affected by shadow flicker.

A planning report prepared on behalf of Kiernan Milling found that nearby dwellings would experience between 12 minutes and 10 hours of shadow flicker per year, which is significantly below the 30 hours permissible by the 2006 Wind Energy Development Guidelines for planning authorities which still applies while new guidelines are under review. Planning documents say the Granardkill turbine would be fitted with shadow flicker detection and control software to limit the impact on nearby homeowners.

Local independent councillor Turlough McGovern says residents feel they were not consulted about the proposal.

“A lot of residents have approached me and their feeling is they don’t want this going ahead . . . The people of Granard don’t want to look up at the sky at this monstrosity,” he adds.

Granard residents are not alone in their opposition to such proposals. Anti-windmill signs are tacked to trees and telephone poles in numerous villages throughout the midlands, while “Wind Action” Facebook groups have popped up for communities in Roscommon, Kildare, Wicklow, Kerry and elsewhere.

Granard is not battling against the greenification of the electricity grid, Sheridan and McGivney assure. Renewable energy is “the way forward”, Sheridan adds. McGivney wonders why such a structure cannot be placed in some of the many kilometres of nearby bogland.

Residents of Granard and Granardkill have not forgotten the jobs and stability which afforded them by the planning applicants Kiernan Milling. McGivney says locals are “strong supporters” of the firm but have nothing to gain from this proposal.

“We understand the importance of having industry in a small town like this. However, it cannot come at the detriment of community projects that we have built from nothing. This is our future and our nieces and nephews futures and we don’t want to be the generation that allows this to negatively impact our town,” McGivney says.

Kiernan Milling, when asked to respond to concerns raised by locals, did not do so.