Reforms ‘will not address climate, biodiversity or water problems generated by Irish agriculture’ 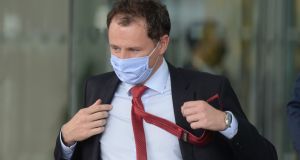 The CAP deal is the ‘first step’ in providing a stable framework for farmers to plan their business over the next few years, Minister Charlie McConalogue said. File photograph: Alan Betson / The Irish Times

Ahead of a critical vote in the European Parliament on Friday, Irish environmental groups have claimed the EU common agriculture policy (CAP) reform package agreed earlier this week is not in the best interests of farmers and is a betrayal of Irish nature.

BirdWatch Ireland (BWI) said on Thursday it was “dismayed with the shape of the CAP agreed by the majority of Irish MEPs and the Agriculture Minister Charlie McConalogue at the European Council”.

“The proposals agreed will not address the climate, biodiversity or water problems generated by Irish agriculture unless they are radically changed,” said BWI head of advocacy Oonagh Duggan.

“MEPs have the opportunity to change their minds, as well as the legacy they will leave behind them, by voting the CAP down in the final vote on the overall package . . . and sending it back to the European Commission, ” she added.

The proposed new CAP was not in line with the objectives of the EU Green Deal, including Europe’s biodiversity and farm to fork strategies, Ms Duggan said.

Sending it back to the Commission was to ensure appropriate investment, action and ambition could be injected into the proposal to address the challenges of biodiversity loss, climate breakdown and declining water quality, she added. “Farmers are part of the solution to these problems but they need the supports and policies to drive change.”

The CAP budget is one-third of the overall EU budget; €387 billion of €1,074 billion total. When it was agreed it came with the requirement that it would need to demonstrate higher environmental ambition, Ms Duggan said.

“This is not reflected in current proposals. This proposal is a waste of taxpayers’ hard-earned cash.”

“Farmers, nature and climate have been betrayed, with a weakening of the environmental conditions for the Basic Payment and labelling of non-environmental payments as environmental spend. There will not be much cash left over for truly effective environmental action to save threatened bird species, such as the Curlew and the Lapwing, which are in serious decline because of the intensification of agriculture and other land use changes,” she said.

Stop Climate Chaos policy co-ordinator Sadhbh O’Neill told Greennews.ie the proposed CAP would be “a disaster” for nature and the climate.

“It locks in more pollution and ecosystem degradation for another seven years, and it is fundamentally incompatible with the commitments in the EU green deal which were supposed to chart a new approach to biodiversity and climate,” she added.

Irish Green MEP Grace O’Sullivan called for radical reform of the package. “Whoever decided to call this ‘the CAP reform’ might like to check a dictionary. Reform would mean improving the current CAP and aligning the future CAP package with the European Green Deal. This CAP should be transformative, it’s not. This CAP is regressive,” she told the parliament.

“The recent European Court of Auditors report clearly concluded that declining biodiversity on farmland is a major threat to both the environment and to farming itself,” she added.

The CAP must continue to provide vital support to farmers, Ms O’Sullivan said, but that needed to be fair and targeted at a transition towards improving farming methods “that help to stop – not speed up – runaway progression towards mass extinction”.

The European Environmental Bureau said the next CAP would remain a swamp of vested interests that are “stuck in the past” and uphold financial incentives for intensive farming. For the first time, the EU would hand almost the entire CAP budget to governments with “only vague rules and targets”.

A significant amount of the €350 billion pot will go to direct payments, which according to the EEB would support “the worst kind of destructive farming, with little environmental conditions”.

The deal is the “first step” in providing a stable framework for farmers to plan their business over the next few years, Minister Charlie McConalogue said. “It will support farm incomes while helping us build a sustainable agriculture sector contributing to the EU green deal,” he insisted.

IFA president Tim Cullinan confirmed “the reality is that the new CAP will give Member States more flexibility to design their own strategic plans, but the enabling legislation will still be crucial”.

“The focus of the CAP must remain on supporting farmers to produce safe, nutritious food sustainably for the benefit of consumers in Europe and beyond,” he said.

“Farming must be sustainable economically as well as environmentally. Many aspects of the CAP proposals and the EU Green Deal will put more cost on farmers without any extra return. This is not sustainable,” Mr Cullinan added.

“The CAP rules and the new strategic plans will be vital for the future of farming. Farmers are experiencing falling prices, yet more costs are being imposed on them. We need to strike the right balance to ensure economic as well as environmental sustainability,” he said.

Once the process of voting on amendments is completed the CAP will enter the “trilogue stage” where the European Parliament, the European Commission and the EU Council will attempt to come to a common position.