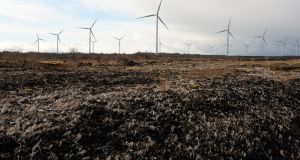 Restoring boglands would be a marvellous incentive for staycations while at the same time protecting biodiversity, Mr Mulvey believed. Photograph: Dara Mac Dónaill

There is an urgent need to change State aid rules to better support local authorities, businesses and communities in the Midlands moving away from reliance on peat production, according to Just Transition commissioner Kieran Mulvey.

There is no point is asking local communities to “think big” and then reject their ideas because of State aid or competition rules, he told the annual conference of the European network of advisory councils on environment and sustainable development, which is being hosted by the National Economic and Social Council (NESC).

Mr Mulvey cited constraints on local authorities in particular and lack of multi-annual funding to provide ongoing support for projects, compounded by failure to recognise the world has changed dramatically in how best to provide assistance. In that light, “you have to have new ways of working and doing business”, he added.

This was vital in the context of need for a just transition as the region moves out of peat, he noted. The process, nonetheless, was already making progress, and in spite of Covid-19. The first tranche of €11 million in funding supporting 16 projects for Bord na Móna and ESB workers, and communities, was already in place.

Separately, an allocation of €20 million from carbon tax has been granted to eight local authorities under the Midlands Retrofit Project to make homes energy-efficient and carbon-neutral.

The transition was strengthened by a “whole of midlands approach”, Mr Mulvey said, embracing enterprise, heritage, greenways/walkways and natural habitats including peatlands, forestry and waterways such as the river Shannon. This was made possible by building on the resilience of communities.

The level of engagement was enormous, he said, reflected in private sector interest in developing a renewable energy hub in the region, and the possibility of using former power stations for research and development. The ESB decision to continue its national apprenticeship scheme in the midlands would help ensure “a big return in renewable energy”, he predicted.

Restoring boglands would be a marvellous incentive for staycations while at the same time protecting biodiversity, Mr Mulvey believed.

Irish Rural Link chief executive Séamus Boland underlined the “huge job-creation potential” in many parts of the midlands as it transitions away from peat. On the ground, this would mean “communities with people” with a reasonable level of wellbeing and income – and a future while using local resources.

Restoring bogs and wetlands in the region was the right course, he added. Just Transition Funds needed to support this process of bringing places back to life, though it was not a straightforward process.

Opening the conference, NESC’s Dr Larry O’Connell said “the need to find ways to translate the principles, equality, equity and social inclusion, underlying just transition – and the hugely admirable though challenging idea of ‘leaving nobody behind’ – into concrete actions and processes” was now critical.