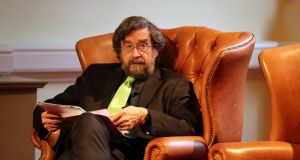 Prof John Fitzgerald: ‘The legislation should not be over-prescriptive on additional functions for the Council that could serve to distract from or dilute its core mandate.’ Photograph: Nick Bradshaw/The Irish Times

The work of a revamped Climate Change Advisory Council (CCAC) risks being overloaded by requirements in proposed new legislation, which could see it embroiled in judicial reviews and distract from its central role in setting carbon budgets.

That was the warning from current CCAC chairman Prof John FitzGerald, who said the Climate Action and Low Carbon Development (Amendment) Bill as drafted was cumbersome, and would undermine its operation and efforts to achieve the national target of carbon neutrality by 2050.

“The legislation should not be over-prescriptive on additional functions for the Council that could serve to distract from or dilute its core mandate,” he said.

Addressing the Oireachtas Climate Committee on Wednesday, Prof FitzGerald said the list of 25 criteria which the Council “may or shall have regard to” in making their deliberations is lengthy and would make its deliberations very difficult.

“Twenty five is just too many. If this ends up in the courts, then we will have failed,” he added.

The committee is undertaking pre-legislative scrutiny of the Bill which proposes five-yearly carbon budgets by imposing sectoral ceilings on emissions with the CCAC providing independent recommendations on limits.

While welcoming increased climate ambition in the Bill, Prof FitzGerald said it should enshrine “national targets for net emissions”, thereby setting the parameters for the CCAC’s work. The Oireachtas needed to indicate clearly what targets there were for 2030 and 2050, to enable the council develop robust carbon budgets.

“Carbon budgets need to be grounded in solid, thorough, research and analysis, so sufficient resources and time need to be given to the task,” he said. In his view, that would take a year. Covid-19 would hamper the process so recruitment of key personnel should begin immediately even before the legislation is passed.

Carbon budgets “will have far-reaching consequences, not only for the environment, but also for the economy, for different sectors, and for individuals and families”, he said.

It required a much better-resourced secretariat, with the right range of expertise, and time to do their work properly. Denmark had a team of 22 people to perform that task; in Ireland there was currently four, he noted.

Speaking in a personal capacity as the CCAC has not yet formally considered the Bill, Prof FitzGerald said it was essential to have interim targets in the legislation: “We cannot go along for 30 years and realise we have done a botched job.”

He endorsed a separate target for methane arising from agriculture, because that was what science dictates. If emissions from farming were included with CO2, Ireland would have to “eliminate all cattle by 2050”.

To be credible the Bill had to match the science, but that also meant reducing methane. New Zealand, with a similar agriculture sector to Ireland, was reducing its emissions by 20 to 40 per cent by 2050 but no target had been set for Ireland. The Oireachtas must set that, he insisted, and the council incorporate it into carbon budgets.

On the CCAC’s composition, he said it would benefit from international expertise at the table. While acknowledging the Bill’s good intentions in setting out a list of expertise required of Council members, “the outcome could be exclusionary in practice”.

Some “desirable flexibility” was needed, as under current criteria the climate activist Greta Thunberg “could not become a member”.

Asked by Senator John McGahon (FG) if he supported having a young voice on the council who might not have a qualification, he said there was a need for people of all ages but the first requirement was expertise.

In response to committee chairman Brian Leddin (Green Party), who asked if there was enough in the Bill on transport and on the National Transport Authority and local authorities in leading a modal shift, Prof FitzGerald said “rolling out public transport in our cities is hugely important” but he was not sure if that should be in the Bill.