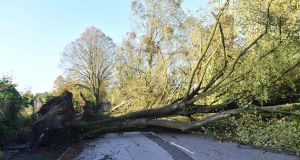 Irish winters are set to be wetter though the number of storms will decrease, say scientists. Photograph: AFP/Getty Images

Ireland is facing a temperature rise of at least 3 degrees this century, the National Biodiversity Conference was told.

Initial forecasting out to mid-century shows Irish summer temperatures will increase by up to 2.5 degrees, with the East coast being most affected, though more heatwaves will affect the entire country. In addition, the growing season will be extended and there will the number of “frost days” will fall by up to 60 per cent, according to Dr Paul Nolan of the Irish Centre for High-End Computing at NUI Galway

Winters are set to be wetter though the number of storms will decrease. On the other hand, “the number of extreme storms over Ireland will increase but more analysis is needed”, added Dr Nolan, who also works for Met Éireann.

Notwithstanding the threat of climate change, habitat loss was “the single greatest threat to global biodiversity”, said Dr John Coll of Maynooth University.

Climate change, however, was already impacting on fragmented habitats, which could become devastated later this century, he said. As a consequence, the engineering of corridors and buffers on Irish farmland was needed, and the re-wetting of degraded boglands with a view to increasing their resilience.

Already, there was evidence of heat stress among Irish species, Dr Tomás Murray of the National Biodiversity Data Centre noted. This meant dragonflies were getting a lot smaller and lighter in colour, while the sex ratio of snake pipefish had changed because of a 0.5 degree rise in sea water temperature over the past 50 years.

Dairy farmer Donal Sheehan of the Bride Valley Project in Co Cork told the conference in Dublin Castle “farmers want to do something for their own environment and for their community”.

This was confirmed by 62 dairy farmers in his area committing to biodiversity regeneration and a wide range of actions, such as providing shelter for wildlife, reducing their carbon footprint, providing for flood relief and letting hedgerows grow naturally.

There was still a long way to go to arrest biodiversity decline linked to intensive agriculture both in Ireland and in Europe generally, given the continuing decline in bird species dependant on farmland and in pollinator populations, said Dr Micheál O’Briain of DG Environment in the European Commission. Agriculture and nature go hand in hand in the context of EU policy, he said.