MetroLink southside section is set to be abandoned 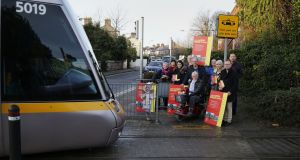 The controversial southside section of the MetroLink rail line in Dublin is set to be abandoned due to Government unwillingness to endure a lengthy disruption to the Luas Green line, it has emerged.

In a major change to plans published last year, the line, that will for the first time connect Dublin Airport to the city centre by rail, will still run from Swords to the city, but is likely to stop north of Ranelagh at Charlemont.

The change, which will be announced next month when the National Transport Authority (NTA) is due to publish a revised route for the line, means that the Metro will not continue on to Sandyford.

The line, due to open in 2027, had been expected to run from Swords to Sandyford with the construction of new track from Swords to Charlemont, and an upgrade of the Luas Green line between Charlemont and Sandyford.

Under the preferred route published last March, the section from Swords to Charlemont would run mostly underground, while the upgraded Luas section would remain above ground.

However, in the subsequent months the NTA came under pressure from senior politicians – including Taoiseach Leo Varadkar and Minister for Housing Eoghan Murphy – to change the route.

Opposition to the plans centred on proposals to close a road linking Ranelagh and Rathmines in south Dublin. The closure of the through-road from Dunville Avenue to Beechwood Road would force motorists into a 1.2km detour through Ranelagh village.

The NTA last July said it would review the route. Two solutions were put forward for the Dunville Avenue crossing: one involved the construction of a rail bridge over the road; the other would see the construction of a railway “cutting” allowing the train to travel under the road. These options would have added in the region of €25-€35 million to the line’s €3 billion budget.

These options were not acceptable locally, and instead plans to extend the tunnel, which was due to end at the current Luas Charlemont stop, past the Dunville Avenue junction, were drawn up, with an expected additional cost of €100 million.

However, it has emerged that this option would have added considerably to the disruption of the Luas line during construction. While the work to connect the two lines at Charlemont could mostly be done without interfering with the running of the Green line, it is understood that tunnelling under the Green line and emerging to create a link at an intermediate point on the line, would require the line to be disconnected. This could result in disruption to the line for two to four years.

It is understood the NTA will next month confirm its intention to submit an application to An Bord Pleanála for the northern section of the route which would end at Charlemont.

“Following consideration of the issues raised at various locations along the route, we intend to publish revised proposals in the coming weeks,” a spokesman said. “Those amended plans will be subject to a further round of public consultation.”

It is not yet clear if a southern Metro route will be pursued at a later date.

The chief executive of Fingal County Council, Paul Reid, last week called for the NTA to go ahead with the northside section of the line, independently of the southside.

It was “not acceptable” he said that difficulties relating to the route from Dublin city centre to the south of the city would hold up construction of the northside leg of the line.

“If needs be, the project should be divided into two phases, north and south, with preference given to the northern phase to ensure it is completed on schedule in 2027,” he said.