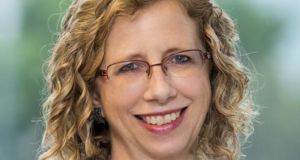 Inger Andersen, the director general of the International Union for Conservation of Nature (IUCN)

A collapse in species is evident throughout the world including Ireland but pointing the finger of blame at farmers is not the way to address the crisis, according to the leading conservationist Inger Andersen.

Ireland has particular problems with the decline of freshwater species and pollinators that need to be addressed urgently, the director general of the International Union for Conservation of Nature (IUCN) warned.

With the right response that loss of biodiversity could be reversed. “Nature is very forgiving. If we invest in nature, it will bounce back – unless we have caused it to go into extinction,” she added.

Speaking to The Irish Times in advance of the National Biodiversity Conference taking place in Dublin Castle, she said the recent report on global insect populations had revealed the extent of duress they were under.

It warned the rate of decline was such that wipe-out within 100 years was on the cards due to a combination of intensive agriculture, notably heavy use of pesticides, urbanisation and climate change.

Of the 3,000 species of plants and animals that have undergone a “red-list conservation assessment” in Ireland, one in every four species is threatened with extinction.

A broader focus was needed on what products consumers buy; whether they consumed organic products or not, but also on how they placed their voting preference in the ballot box.

In many countries there were subsidies for damaging agrichemicals, when farmers needed to look at becoming “biodiversity positive” by growing flowering plants and hedges and for example deploying “plough-in” practices; “things farmers used to do”.

There was a need to reconsider agricultural subsidies and what kind of behaviour they drive, she said. There was growing awareness of this requirement at EU level, notably in CAP reform discussions, but it was a complex issue and farmers had a hard job.

The average Irish citizen was proud of nature, “and it’s part of their identity. They don’t want to see erosion of that”, she underlined. Ireland, none the less, had a particular responsibility in preserving its wetlands – peatlands and bogs – which were critical to retention of unique species and for carbon storage.

In Europe, freshwater fish were threatened, while 24 per cent of Irish species in this category were endangered. This was most worrying in the Irish context because of its unique post-glacial lakes.

She cited the case of Lough Leane in Co Kerry, home to the Killarney shad, and blunt-nosed Irish charr which is critically endangered, and yet there was evidence of agricultural run-off and invasive species there, which was putting species under pressure.

Ireland had displayed a rarely seen “strong degree of awareness about biodiversity” which was reflected across many sectors including the farming community who understood the issue and were engaged on it, Ms Andersen said.

While an understanding of the implications of climate change was emerging globally, it was less so with biodiversity though that was improving, she believed.

Nature’s role in helping to respond to extreme weather events was becoming apparent to many people, she said, pointing to the case of Hurricane Katrina. Everywhere mangroves were well-established in parts of Louisiana, “the damage was minimal”.

She praised the All-Ireland Pollinator Plan and backed the #1thing4nature campaign running in advance of the conference, where people have committed to one action to improve biodiversity.

Last weekend, UN secretary-general António Guterres, announced he is to appoint Ms Andersen as the new executive director of the UN Environment Programme. She is set to succeed Erik Solheim, who resigned in November amid controversy over his huge travel expenses.

She said she was deeply honoured to have been nominated. “At this critical time for the planet and for humankind, environmental stewardship has never been more important,” the Danish environmentalist tweeted.

Emissions ‘cop outs’ for agriculture based on faulty science ‘not acceptable’

‘Summer is not lost ’ - Taoiseach announces accelerated easing of coronavirus restrictions 14:51
Cities continue to account for outsized proportion of confirmed Covid-19 cases 14:46
HSE says contacts of confirmed cases four times more likely to get Covid-19 14:00
Emissions ‘cop outs’ for agriculture based on faulty science ‘not acceptable’ 13:57
Coronavirus: People to be allowed to travel anywhere in their county from Monday as Ireland moves to exit lockdown 13:25