Ireland closer to Trump on climate change than it thinks 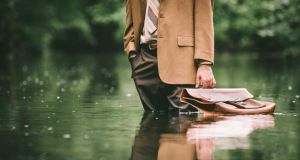 Rising concern: Ireland has been implementing none of the strategies to offset the problem and emissions are actually set to rise. Photograph: Getty Images/Vetta

If you listened to what Irish Government Ministers and Donald Trump have said about climate change over the past 12 months, you would think they were living on separate planets: One heating rapidly; the other one a flat earth.

But when you start testing words against action, the differences are suddenly not so marked.

Sure, the Minister with responsibility for tackling climate change, Denis Naughten, has not reversed any policies in the way Trump did on coal. The problem is that when it comes to new policy initiatives to contain Ireland’s emissions, there is not a whole lot going on.

The latest projections published on Thursday by the Environmental Protection Agency (EPA) make for grim reading. The latest figures show that Irish emissions will be between 4 per cent and 6 per cent below 2005 levels.

That’s a good deal short of the target of 20 per cent.

Up, up and away

What is more worrying is that after 2020, when emissions should be on a steep downward curve, the EPA is predicting they will actually increase in most areas. The two most dominant sectors (outside the emissions trading schemes) are agriculture and transport. With a growing economy, both are expected to increase.

The FoodWise 2025 policy is the main plank of Irish agricultural policy. Unless there is a dramatic breakthrough in technology it will lead to increased activity in the poultry and pig sectors, as well as an increased use of fertilisers. As yet, no “fix” has been found for that.

Equally, transport emissions are set to increase by almost 13 per cent between 2016 and 2020. Sadly, there just does not seem to be equivalent investment in cleaner or alternative transport.

Investment in cycling has been pared back. So has investment in public transport. The Metro North is on the long finger. And on Thursday, the EPA dramatically cut back its projections of how many electric vehicles would be on Irish roads by 2020, from 50,000 to 10,000.

Denis Naughten, in an opinion piece for The Irish Times, has blamed the failure to meet targets on two factors. The first is the recession, which resulted in lack of funds to invest in combating climate change (even though the recession in itself led to big reductions in emissions).

The second factor, he says, is the target agreed to by the Irish Government in 2009. He suggests a target of reducing emissions by 20 per cent against 2005 levels is ridiculous, arguing a 7 per cent target would be more realistic.

It is an extraordinary attack. Naughten claims the deal struck by the Greens was disastrous for the State and will cost the economy billions.

The Greens have responded in kind, saying Naughten is attacking them to distract attention from his own failed policies. Eamon Ryan, the party’s leader, claimed Naughten’s ministerial record had been one of inaction since taking over the role a year ago.

Climate change has been – pardon the pun – on the political back burner since the recession started to bite.

There is one unpalatable reality about meeting the targets (unless technology provide a miracle cure for all ailments) and it is this: it will mean sacrifices and inconveniences, both in lifestyle and wealth. It’s a really hard thing to sell to a population: that everybody must live more modestly.

And Ireland is caught between two competing ambitions, which are (right now) irreconcilable. One is economic growth. The other is the climate change obligations imposed on the State by the EU, and more latterly by the Paris Accord. The main plank of agricultural policy, Foodwise 2025, will lead to higher emissions – the Environmental Protection Agency said as much yesterday.

Naughten has expressed befuddlement at those who criticise him for seeking more scientific evidence and reports. That is a fair point, but the difficulty is that the whole thrust of policy seems directed at the drawing up of strategies. The implementation part has not happened – in solar, in offshore wind, in public transport, in cycling, in insulation, in decommissioning fossil-fuelled power stations.

It’s not all pain. There are some huge opportunities and many exciting alternatives in development and planned. Technology will certainly take the edge of any pain that might be involved. At some stage, politically, hard decisions will have to be taken.