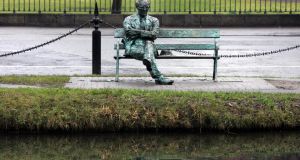 The Pembroke Road Association said the market stopped grass growing and birds nesting and an “enormous refuse bin” had been placed “exactly at nose height at the back of the Patrick Kavanagh bench”. Photograph: Eric Luke

Waterways Ireland is to continue to operate a lunchtime market on the Grand Canal near Mount Street bridge in Dublin, despite it being “seriously injurious” to the canal amenity, according to Dublin City Council.

The council last month refused permission to allow the operation of the market each Friday on the south and north banks of the canal close to the bridge which runs from Mount Street to Northumberland Road in Dublin 4.

The council said the market was contrary to its policy to “preserve, provide and improve recreational amenity and open space and green infrastructure” along the canal.

“The proposal is considered to be seriously injurious to the amenity of the canal given the limited area for the stalls to locate adjoining an already narrow pedestrian footpath, and considering the negative impact on the residential properties directly adjoining this section of the canal,” the council said.

“The proposal is therefore considered contrary to the proper planning and sustainable development of the area.”

Waterways Ireland had sought to operate the market once a week, but it does not require planning permission to hold it for up to 30 days a year, which would allow it to continue most Fridays during the year. The organisation said it intends to use this planning exemption to continue the market.

Dublin 4 residents and businesses who had objected to the market, largely on environmental grounds, are now seeking to overturn plans for another lunchtime food market on the canal, on Thursdays, held further west near Burlington Road.

The council in this instance granted permission last month to Waterways Ireland for the weekly market on the canal at Mespil Road on the south bank and Wilton Terrace on the north side. This has been appealed to An Bord Pleanála.

Waterways Ireland originally received a three-year planning permission in October 2013 to operate the Thursday market but this has expired.

The Pembroke Road Association said the market stopped the grass growing on the bank, deterred birds from nesting and replaced the sound of water with “the hum of generators and the smell of fast food, cooking oil and grease”.

An “enormous refuse bin” had been placed “exactly at nose height at the back of the Patrick Kavanagh bench” the association said.

Donnybrook Fair on Baggot Street and Fresh Life Foods on Mespil Road also appealed to the board against the market. They said staff and customers of the stalls tried to use the toilet facilities of local businesses, whose custom the market was affecting. The markets also had an adverse ecological impact on the canal and promoted the expansion of takeaways, contrary to council policy, they said.

Waterways Ireland said it will provide any information An Bord Pleanála requires.