What was that strange camouflaged insect? Readers’ nature queries 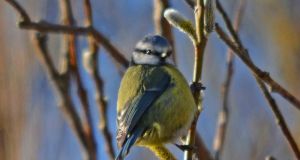 I saw this insect in our garden recently. It was camouflaged like a leaf.
Matthew McCarthy (aged 11), Rathgar, Dublin, 6
It was the common green shield bug which had just come out of hibernation.

Recently photographed a blue tit and was struck by their amazing camouflage. I’m not quite sure if it was eating buds or storing for nest-building.
Emer O’Shea, Ballyshannon, Co Donegal
Probably picking insects or pollen from the catkins.

What is the name of the attractive bird that appeared at the edge of the canal near Baggot Street.
Mary D’Arcy, Ballsbridge, Dublin, 4
It is a moorhen, more usual in marshy and more vegetated parts of canals, lakes and slow moving bodies of water.

This is the biggest, fattest, longest bumblebee I have ever seen. I watched it for a few minutes and it just rummaged in the grass before flying off.
Eithne Mackell, Blackrock, Co Dublin
Your bee is the largest of our native bumblebees – Bombus terrestris, the buff-tailed bumblebee, also called the large earth bumblebee. The second name is apt as it nests below the ground. It was probably a queen just out of hibernation.

For the first time in three years I heard a woodpecker drumming in the Belvoir Forest.
Simon Doran, Belfast
Swallows were early this year. Imelda Power saw four/five swallows skimming the water on the Lough, Cork, on March 28th. And Sean Bashford saw several flying over the Mulcair river at Annacotty, Co Limerick, on the same day.

Ethna Viney welcomes observations and photographs at Thallabawn, Louisburgh, Co Mayo, F28F978, or by email at : viney@anu.ie. Please include a postal address.