Stars of the watery underworld in danger from farm pollution

Michael Viney: Rare plants and fauna are a feature of Ireland’s hard-water lakes 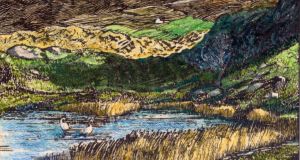 Irish lakes are home to rare plants and fauna that few nonsnorkelers will ever see. Illustration: Michael Viney

An ecologist friend spends much of his working life in a neoprene wetsuit, floating face-down with mask and snorkel on Ireland’s lakes and lagoons. He scans the plants growing below, noting their species, densities and vigour, the sort of bottom they’re rooted in and the state of the water. Wrist pad, underwater camera and GPS gadget all help him keep a record.

Dr Cillian Roden is one of a small group of aquatic ecologists sorting through Ireland’s 12,000-odd lakes and ponds to help decide what warrants conservation. The EU habitats directive puts lakes for protection in five descriptive categories, but matching these up with this island’s watery landscape is not always easy.

A report for the National Parks and Wildlife Service by its project officer, Dr Aine O’Connor, says bluntly: “The EU interpretations of these habitats are vague and have caused confusion across member states.” An intricate weave of different rocks and aquatic plant communities can raise problems within a single Irish lake.

Helped by Roden and his colleagues, O’Connor has tried to refine the EU’s own interpretation manual, so that conservation can be tailored to what’s needed. Ireland has special responsibility, for example, for hard-water lakes and for one rare plant that, growing well submerged, few non-snorkelling people will ever see.

Geological history has left limestone as the top bedrock layer over much of the island, so that more than 70 per cent of domestic water supply is “hard”, causing problems of limescale in kettles, taps and toilet bowls.

Limestone lakes produce something called krustenstein, a scientifically fascinating, species-rich crust of cyanobacteria. Coating cobbles and rocks in shallow waters, it can make them look like cushions of green coral. It is often home to a very rare water beetle, Ochthebius nillsoni, discovered in a Burren lake in 2006 and previously known only from a lake in northern Sweden.

Limy water also shapes calcified plants, the brittle stoneworts, or charophytes. These grow in limestone lakes of the midlands, but also in shallower coastal lagoons. The last time I met Cillian in his snorkelling gear he was floating on the whooper swans’ lake behind the dunes. With a bottom rich in limy, shell-sand blown in from the shore, it grows its share of charophytes.

Ireland’s range of these species is unique in Europe. In unpolluted lakes, they take up nutrients that would be used by pondweeds, leaving the water exceptionally clear. A notable example historically has been Lough Carra in Co Mayo, so admired by botanist Robert Lloyd Praeger.

Today, however, farm run-off flowing into Carra feeds clouds of summer plankton, algae and waterweeds, shading out the charophytes, crowding the krustenstein and turning the brilliant marl of the lakebed from snowy white to green.

In clear, hard water of lakes on or near the western coast, another submarine plant has been growing in much the same places for almost 10,000 years. It is found around the northern hemisphere and plentifully in North America, but Ireland and Scotland now offer its last secure refuges in Europe.

The slender naiad, Najas fragilis, is rarely more than 30cm tall and the feathery whorls of the plant can grow up to 10m deep, at the very limit of sunlight. It needs a rather special environment, in lakes mostly in peatland with underlying marble (as in Connemara’s Ballynakill), limestone or even calcareous sand.

The plant is an annual, tucking tiny green flowers into its axils and self-pollinating to produce its seeds. Their germination in the lake bed can vary hugely from year to year, so that colonies may dwindle to a very few plants or even disappear.

Whole lakes are conserved for the plant’s protection under Annex II of the EU habitats directive. Intensive searches in recent years, mostly led by Cillian Roden, have found it in 65 lakes so far, spread down the west coast from Donegal to Kerry.

There may be more to come in the myriad lakes of Connemara. The plant was first found in Cregduff Lough, south of Roundstone, in 1852. It still exists there today, but the lake is steadily filling in with floating vegetation. Man-made eutrophication and peatland drainage are the more usual threats,

The slender naiad is, as Roden remarks, “difficult to find and often overlooked”. Frequently in the company of other rare aquatic plants, it makes the chemistry of its lakes often special and worth looking after.

Snorkelling in Ballynakill Lough (still not, as it happens, a Special Area of Conservation or SAC), he found masses of Hydrilla verticillata, very scarce outside eastern Europe. It’s “an unobtrusive, straggly, aquatic, weedy thing,” as Tim Robinson described. But it didn’t evolve to be admired.

Michael Viney’sReflections on Another Life, a selection of columns from the past four decades, is available from irishtimes.com/irishtimesbooks