Dublin City Council have noticed an increase of 25 per cent in illegal dumping since the coronavirus lockdown regulations have been implemented. Video: Enda O'Dowd 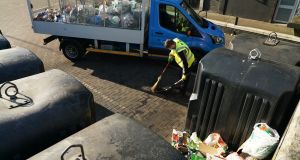 A sharp increase in dumping of household waste has been seen across Dublin city and county during the coronavirus pandemic, with illegal dumping rates up by 25 per cent in Dublin city alone.

Dublin city’s street-cleaning crews are encountering a rise in general refuse, as well as rubbish from household clear-outs, including, in one case, a bath dumped on Bride Street, close to Christ Church Cathedral. In addition, workers are having to tackle Covid-19-related materials, such disposable gloves and masks which could be contaminated by the virus.

Meanwhile, in south Dublin the county council has seen an increase in the illegal burning, as well as dumping, of household waste, and is using drones to try to identity perpetrators. While in Fingal, people are driving into the countryside to throw black bags from their cars.

“It is very disappointing that people are doing this,” Simon Brock, of Dublin City Council’s waste-management department said. “We think we are seeing an increase in illegal dumping that’s 25 per cent over what we would normally encounter. Given the challenges at the moment, that impacts on the other services we need to provide.”

The problem appeared to be affecting all parts of the city, he said. “We are seeing it across the city. In residential areas, down laneways, on green spaces, and on the street.”

The council has over recent weeks highlighted the issue of disposable masks and gloves being discarded in the street. “People have to take personal responsibility here and ensure they are disposing of these items safely,” Mr Brock said. However, it was difficult to determine why dumping in general had increased so much in the current circumstances.

“It’s very hard to put a finger on it. It could be down to a misunderstanding about the availability of services, but all waste services are still operating – household waste collections, skip bags, our recycling centres are reopening, the options are there,” he said.

“Again, there is element of taking personal responsibility in this. People know they have to properly dispose of their waste and if they are doing a general clear-out, that there are plenty of options available to them.”

The council will still prosecute illegal dumpers, he said. “We are continuing to carry out enforcement as we normally do, both of people dumping their waste and the unauthorised waste collectors who are engaged in criminality.”

“We are seeing a lot more dumping, and a different type of dumping than we would have previously seen at litter black spots,” Damien McNulty of the council’s waste enforcement section said.

“Previously it would have been a lot of house-clearance type of material, but there’s been a marked change and now it is mostly household waste.”

The larger number of people at home, without access to workplace bins, could account for some of the increase in dumping, he said.

“We are surmising that there would be lots of people who previously used their employers’ bins or skips to get rid of their waste, who don’t have access to that at the moment.”

“The problem at the moment with any waste left at the side of the road is you have to assume that it could be contaminated with Covid-19. If we do think we might find a bill we would quarantine the bag for 72 hours before going through it, but our priority is safety.”

The council is, however, using other means to identify dumpers. “We are using surveillance drones at known black spots and when we get knowledge from local residents.”

Waste is being dumped “everywhere and anywhere” Mr McNulty said. “You’ll see it along the main arterial routes – black bags just left at the edge of the road, at bus stops, it’s everywhere, unfortunately.”

The council had also secured “good info” in relation to illegal waste collectors. “With less traffic on the roads it’s harder for them to be inconspicuous.”

There had also been a “100 per cent increase” in the number of bottles brought to bottle banks, he said. “I think that’s something that’s happening in all areas.”

In Fingal both the public and litter wardens were reporting an increase in illegal dumping, Michael Campbell of Fingal County Council’s litter-management office said.

“We are having a particular issue at bottle banks, but also at textile banks, because the charity shops people would normally go to are closed and people are at home clearing out the closet. But when those textile banks are full, we would ask people to take the stuff away because it just encourages more dumping.”

Mr Campbell also thinks that some dumping is being perpetrated by people who previously used their employer’s bin. “I think there are possibly two factors: because there is reduced traffic on the road, people think there’ll be less chance they’ll be observed dumping; and some people traditionally brought their waste to their places of employment and they can’t do that now.”

The dumping in Fingal appeared to be perpetrated by households, rather than by illegal commercial operators, he said.

“It seems to be low-level domestic illegal dumping, rather than the ‘man with a van’ type of dumping.”

Large parts of Fingal are still rural, and these areas were a draw for dumpers.

“The waste is being dumped county wide, people are putting black bags into their cars and driving out of the estates into rural areas.”

In relation to the litter found in Fingal’s urban areas, there was a notable change, Mr Campbell said. “It used to be the cigarette butts and crisp packets that would be the debris reported, now it’s discarded masks and gloves.”

The council was continuing its normal enforcement activities and no dumper should think their activities would be overlooked, he said. “If anything, people surely in these times should feel more civic duty any make sure their waste is disposed of properly.”

Dún Laoghaire-Rathdown County Council is the only Dublin local authority not to have seen a substantial increase in illegal dumping, but a spokeswoman said, it was “continuing to monitor the situation”.

Just before 8am, only two hours since work has started, a single Dublin city street cleaning truck, known as a side loader, is already full to the brim with almost 40 bags of rubbish discarded in the north inner city.

In Beresford Street, close to the city’s fruit and vegetable markets, a pile of plastic bags has been ripped open on the ground, “probably by foxes or seagulls” says Shay Brady, the Dublin City Council waste management services co-ordinator for the area.

The contents of the torn bags spill across the footpath – food, nappies, several bottles of bleach, sanitary towels, glass bottles – the sort of waste that should be in a household bin. It’s picked up with a shovel and brush and joins the rest of the rubbish in the van.

At a bottle bank in Phibsborough, dozens of cardboard boxes are shoved in between the bottle receptacles, more are lying on the ground along with plastic bags filled with bottles. There’s also plenty of broken glass strewn around. The broken glass is swept up first, before the boxes and backs are loaded into the already overburdened truck.

“People think if they leave a box or a bag beside the bottle bank, that’s fine, but that is illegal dumping, and when stuff is left on the ground like that it can’t be recycled,” Mr Brady says.

“The bottle banks are becoming a big problem, we get domestic waste dumped here, or bottles stacked up on top of the bring centre, that takes a long time to clear, but it has to be done quickly because it attracts more waste if it’s left.”

In some cases people are lazy and just leave the bottles in bags or boxes instead of putting them into the receptacles, even when they’re empty. It is true that the number of bottles brought for recycling has increased in recent weeks so the banks fill rapidly, but Mr Brady says they are serviced regularly.

“Our bottle banks are still operating as normal, they’re still being emptied by our contractors regularly. If the bottle bank is full, come back later, or go to the next one, we have 84 bottle banks so there’s always another nearby, just please, don’t just dump them on the ground.”