Coronavirus: Community infection numbers ‘not falling as much as we would like’

Chief Medical Officer Dr Tony Holohan has advised the public against seeking out the services of hair stylists and barbers during the continued Covid-19 restrictions. Video: RTÉ 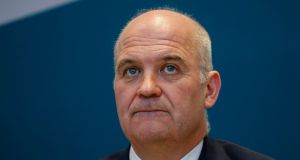 The number of Covid-19 infections coming from the community is “persistent” and “not falling as much as we would like”, the Department of Health’s chief medical officer Dr Tony Holohan has said.

While most indicators are going in the right direction, Dr Holohan said there is a “persistent level of infections coming from the community, if I’m honest about it, particularly from younger people in the community”.

Speaking on Wednesday night, he said he remains “hopeful”, despite this, that restrictions on movement and other measures will be relaxed on May 18th in line with the Government’s plans.

However, he said that were he asked now about easing restrictions tomorrow, he would not yet be in a position to advise that this should happen.

“I won’t sit here today and say that we are going to be in a position on May 18th (to ease restrictions). If the conditions were today, I think we still aren’t at that point. But I’m hopeful,” he said.

The National Public Health Emergency Team (NPHET) also believes, Dr Holohan said, that further spikes in the infection rate in the community were possible as measures are relaxed.

“When Ireland eases social distancing restrictions, we may have periods of time when the numbers of people infected increases significantly.”

He was speaking after the publication of new figures which showed a further 37 people diagnosed with Covid-19 had died, bringing the State total to 1,375. A further 265 cases were confirmed, bringing the total to 22,248.

Health officials said 78 per cent of those infected with Covid-19 have recovered and the majority of these, almost 72 per cent, while in the community.

An additional 6.4 per cent, or 1,399 people have been discharged from hospitals, bringing the number of people who have recovered to 17,110, or 78 per cent of all analysed cases.

The department also published an analysis of underlying conditions associated with 327 cases of people with the virus who required intensive care. A total of 165 people, or 50 per cent, had chronic heart disease, 76 (23.2 per cent) had chronic respiratory disease, 75 (22.6 per cent) had diabetes and 53 (16.2 per cent) had a body mass index of more than 40, which is defined as obese.

According to the latest figures from the Health Protection Surveillance Centre, as of midnight on Monday, 13 per cent of cases had been hospitalised. Of those hospitalised, 373 cases were admitted to the ICU. Dublin still has the highest number of cases, with 10,734, or 49 per cent, followed by Kildare, with 6 per cent (1,289) and Cork with 5 per cent (1,192).

Dr Holohan emphasisd that the easing of social distancing restrictions be accompanied by “a high level of adherence to the fundamental, individual behaviours needed to guard against transmission of the virus. We have to adapt our behaviours in order to live safely with Covid-19.”

He said it was beyond the remit of NPHET to determine whether it was possible for the Leaving Cert to go ahead in keeping with social distancing rules.

He said the team was available to give advice to the Department of Education, if it was sought.

A planning meeting over the future of the Leaving Cert exams concluded on Wednesday afternoon without a decision on whether a “plan B” of awarding candidates predicted grades should be used instead.

Minister for Education Joe McHugh attended a meeting with with parents, teachers, school managers and students over plans to hold the Leaving Cert at the end of July.

Teachers’ unions met on Wednesday night to discuss what role if any its members will be prepared to play in grading Leaving Cert students if the exams are cancelled later this summer.

Meanwhile, Minister for Finance Paschal Donohoe said Government income and wage supports introduced in response to the Covid-19 crisis are set to be reduced in the weeks ahead.

He indicated that the wage subsidy payments, which firms are using to keep some 400,000 people in their jobs, will continue in a modified way beyond the current expiry date at the end of June.

The warning came as the European Commission published a forecast suggesting the State’s economy will shrink by about 8 per cent this year due to the impact of the pandemic. The economy is then expected to rebound by about 6 per cent next year, though Brussels warned its predictions are “clouded by a higher than usual degree of uncertainty”.

Meanwhile, traffic volumes have increased by more than 10 per cent on many routes into the State’s main towns and cities since some restrictions on movement were lifted on Tuesday.

Car volumes on the main roads were up during rush hour on Tuesday morning (7am to 10am) by between 5 and 16 per cent compared to the previous Tuesday.

Figures released by Transport Infrastructure Ireland (TII) show that the largest increase was in cross-border traffic with the M1 north of junction 20, which is the last exit before the Border, up by 16 per cent on Tuesday and 22 per cent on Wednesday.

Micheál Martin brings to an end one of the shortest ministries in history of State 02:30
Taoiseach sacks Barry Cowen after he refuses to resign 02:29
Access to mortgage-to-rent scheme may be widened 02:23
Irish-based scientists find new link between delirium and brain energy disruption 02:00
Chilean student ‘happy to be free’ after being detained for nearly two weeks in Mountjoy 00:05