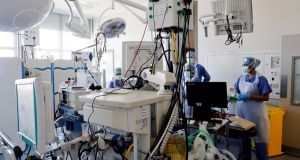 ExThera has agreed a deal with Irish aid agency Gorta Group for potential use of the Seraph 100 in the developing world. Photograph: Alan Betson

A new medical device that has shown promising results in early trials on coronavirus patients may be manufactured in Ireland after talks began on identifying potential sites here.

The Seraph 100, a filtration device that removes viruses and bacteria from the blood, was granted emergency approval by US authorities last month for use in treating Covid-19 patients. The technology received its European safety certification last year and is being used on Covid-19 patients in hospitals in Germany, Italy, Spain and the US.

Made in California by ExThera Medical Corporation, the pump-powered technology uses microbeads coated with heparin, a naturally occurring blood-thinner, to bind the virus and remove it from the bloodstream. It had been in development as a treatment for blood infections for a number of years, but ExThera turned its focus to Covid-19 as the disease spread rapidly across the world earlier this year.

As part of its investment in the device, ExThera has agreed a deal with the Gorta Group, an Irish aid agency, for potential use of the Seraph 100 in the developing world. The agreement allows Gorta to distribute the Seraph 100 for humanitarian purposes in 65 countries in Africa and Asia. As a first step, a consignment of Seraph filters was due to be shipped on Wednesday from the Netherlands to a hospital in Kenya, where trials similar to those under way in Europe and the US will take place.

“This partnership will enable us to save lives in Africa by strengthening public health systems’ ability to respond to Covid-19,” said Gorta Group chief executive Ray Jordan.

The Seraph-100 does not cure Covid-19. Rather it aims to reduce the viral load in patients and blunt the cytokine storm – a dangerous over-reaction of the immune system that is known to occur in severe cases. That provides more time and better conditions for the immune system to clear the virus from the body.

The device has not yet been subjected to large-scale trials, but in pre-clinical testing and in limited clinical use it has been shown to reduce the bloodstream concentration of pathogens in some patients.

Prof Jan T Kielstein, director of nephrology, rheumatology and blood purification at Academic Teaching Hospital in Braunschweig, Germany, who is leading the deployment of the Seraph-100 in Europe, said he was pleased with the “general improvement” of Covid-19 patients during and after use of the treatment. He said it had “immediate and sustained effects” on vital signs and laboratory parameters in the small number of patients who had received it.

Case reports on use of the device in Europe and the US have yet to be published. However, ExThera chief executive Bob Ward said early results were “very encouraging”, with patients showing lower blood pathogen levels and improvements in mean arterial pressure and oxygen saturation.

“We have confidence that Seraph 100 treatment alone or in combination with available anti-viral drugs and vaccines could help curb the current epidemic and save lives,” he said.

ExThera investors have initiated talks with the IDA to identify a manufacturing facility in Ireland that could produce the Seraph-100. It is understood that a number of sites throughout the country are being examined.

The device received its European CE certification in July 2019, allowing its commercial use in Europe to treat blood infections such as antibiotic-resistant bacteria. On April 17th, the US Food and Drug Administration awarded ExThera an Emergency Use Authorisation to use the device in treating Covid-19 patients.

Gorta said its partnership with ExThera aimed to ensure that world-class medical devices were made accessible quickly and affordably in lower- and middle-income countries.

“ExThera’s commitment to simultaneously deploy the Seraph 100 globally into both higher-income country healthcare systems at market prices and humanitarian led programmes at a significant discount should be a beacon for others to follow,” Mr Jordan said. An Irish entrepreneur and investor in ExThera is behind the link between Gorta and the company.

The Seraph-100 was designed to remove a variety of pathogens in patients with bloodstream infections. As the patient’s blood flows through the Seraph filter, it passes over tiny beads with receptors that mimic the receptors on human cells that pathogens target when they infect the body. The filter, using the same principle as kidney dialysis, then returns the blood to the patient with blood cells and proteins intact but having removed harmful substances.

When Covid-19 virus enters the lungs, it triggers an immune response, attracting immune cells to the region to attack the virus, resulting in localised inflammation.

But in some patients, excessive or uncontrolled levels of cytokines, a type of protein, are released. This leads to activation of more immune cells, resulting in hyperinflammation. The resulting cytokine storm might explain why some people have a more severe reaction to coronavirus while others experience only mild symptoms.

Dr Bairbre McNicholas, a critical care consultant and nephrologist at Galway University Hospital, said research indicated the Seraph-100 treatment was well tolerated by hemodialysis patients, and that it could quickly remove bacteria from blood.

While it was not clear yet that the filtration technique could be as effective with other conditions, it was necessary “to go in with a fresh pair of eyes”, she believed, because in severely sick patients Covid infection went beyond the lungs to affect kidneys as well.

She said the technology offered exciting possibilities, though she stressed the importance of generating data from larger clinical trials with control groups.

UCD professor of clinical pharmacology Pat Murray, a kidney specialist at Dublin’s Mater and St Vincent’s hospitals, said blood filtration was used in ICUs and on renal patients; the difference in this case was the use of heparin, a naturally occurring substance, normally used as a blood thinner.

“The clever bit is using coated microbeads with heparin,” he added. This created a much bigger binding surface to remove the virus. Randomised trials were needed to identify which patients were likely to benefit, and impact with different viral loads needed to be evaluated.

Prof John Laffey, an ICU doctor and anaesthesiologist at Galway University Hospital, also said the technology was showing some patient improvement, based on getting in at early stage of infection and removing cytokines, although more trials needed to be done to confirm its potential.