Coronavirus testing criteria broadened to include people with one symptom 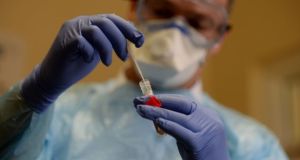 GPs have been informed that the criteria for Covid-19 testing has been broadened. Testing is no longer confined to those in at-risk groups and will now include those who have a cough, fever or shortness of breath.

The decision to broaden the criteria was made by the National Public Health Emergency Team, who announced the deaths of another 23 patients at its briefing on Tuesday. There have now been 1,339 Covid-19 related deaths in the Republic. The total number of cases stands at 21,983.

The Irish College of General Practitioners said it welcomed the widening of the testing criteria.

“This is a necessary step as restrictions are easing, “ said Dr Mary Favier, president of the ICGP. “We are increasingly confident the systems the HSE have put in place will be able to accommodate and manage the ramping up in the number of tests performed each week.

“As we increase the number of tests, it is critically important that contact tracing is timely and appropriately organised in order to deal with the anticipated rise. If a test result is positive, Public Health must ensure they quickly trace that person’s contacts so that we are then managing the ongoing spread of the disease.”

From mid-March, just one symptom was necessary to become eligible for a test. Chief Medical Officer Dr Tony Holohan said around 20,000 people a day had been seeking a test at the time and acknowledged that the net may have been cast too widely “in good faith’’. Changes to the testing criteria were made in late March and those with symptoms of the disease also had to belong to one of several priority groups, such as healthcare workers, close contacts of a confirmed case, pregnant women or those suffering from some chronic conditions in order to qualify for testing.

Since late April, the testing criteria were slightly relaxed, with one symptom plus membership of a priority group making someone eligible for testing. Testing is now no longer confined to those in at-risk groups and will include those who have a cough, fever or shortness of breath.