The trouble with terrapins and two wild reptiles living in Ireland 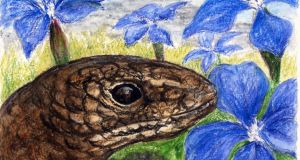 The lizard shares the Burren’s warmth with an alien but locally naturlised reptile, a legless lizard that most resembles a snake. Picture: Michael Viney

The three small animals scattered at the tideline on Dublin’s Dollymount Strand (see “Eye on Nature”) were unmistakably turtles, if a bit boxy-looking compared with the oceanic kind. They were actually freshwater terrapins, and immersion in cold seawater had left them very dead.

Last November another lifeless terrapin bobbed forlornly in the foam at Killiney beach on the southern shore of the bay. One wonders if they were all launched gently, little legs beating away, in some desperate if deluded solution to their future, or just chucked into the waves on the off chance they’d survive.

The trouble with terrapins is that they grow. Bought from a pet shop at the size of a tortoiseshell brooch, they go on enlarging, quite rapidly, to about 30cm long. Their lifespan is lengthy, too, up to 50 years, perhaps beyond human enthusiasm or domestic arrangements. Animal charities are left hosting rather more terrapins than they might wish, and Dublin Zoo has to keep a close eye for furtive introductions to its ponds.

To have had three of the turtle as pets seems, indeed, a bit ambitious, if they were to be properly looked after. From the abundant online advice, I have sifted the following:

The ideal provision is a deep outdoor pond and a land area with heating and lighting, all secured against the terrapins escaping or predatory herons intruding. Indoors, it’s a big terrapin tub or 60-gallon fish tank, with water deep enough for the terrapins to swim in and submerge.

They poop a great deal from a carefully varied and messily-eaten diet, so that the water needs powerful filtration or daily changes

There should also be a dry area that gives each turtle its spot to bask under a reptile heat lamp, with an extra UV lamp to boost its calcium. Rocks, logs and plants are needed for shade and shelter, and floating toys - plastic ducks or ping-pong balls – to enrich their little lives.

Quite what they offer in return is not immediately obvious. They are often prettily striped. They have a sharp lift to the jaw as if about to ask a question, but don’t much care for being picked up in response, even carefully by the edges.

They are commonly known as “sliders” because sliding off rocks into water is what they do in wetlands of America. And they poop a great deal from a carefully varied and messily-eaten diet, so that the water needs powerful filtration or daily changes. Even so, terrapins are often smelly. A tortoise, say the bloggers, is less work and more fun.

The two common pet terrapins are the red-eared slider and the closely similar yellow-bellied sort. The red-eared one, Trachemys scripta elegans, has been the most widely exported pet reptile, with 52 million exported from the US between 1989-1997.

More recently, the EU has banned the red-marked animals, which breed in the warmth of southern Europe and bring new parasites to native turtles. In Ireland, three have been recorded as surviving “wild” in the Phoenix Park (that’s the zoo), without breeding., The species is seen by Biodiversity Ireland as “occasionally present, casual, vagrant, migratory”, pending the uncertainties of climate change.

The most abundant, and our only native reptile, is the common lizard, Zootica vivipara, clustered mostly along the coasts

Meanwhile, given the approach of St Patrick’s Day, two more species of wild reptile living in Ireland are about to emerge from their winter refuges and look about for mates.

The most abundant, and our only native reptile, is the common lizard, Zootica vivipara, clustered mostly along the coasts. I disturbed one while digging my garden in “south-facing, damp, tussocky grassland”, an ideal habitat, according to the Herpetological Society of Ireland.

I thank the HSI also for a new word, “brumation”, which is what cold-blooded creatures have instead of hibernation, slowing down their metabolism for winter beneath a rock or log.

I’d like to picture a lizard now, however, emerging on to dry limestone in the Burren and feeling the warmth against its belly and tail and five-fingered claws. First it needs to slough its old skin, then to establish a territory and find a female for much rough, nape-seizing copulation, mostly in May.

The lizard shares the Burren’s warmth with an alien but locally naturlised reptile, a legless lizard that most resembles a snake. My drawing of its head is much enlarged and there’s perhaps 30 cm of smooth, shiny, cylindrical body curled between the spring gentians.

This is the slow-worm, Anguis fragilis, first reported in the Burren in 1977, a time when New Age travellers from England were seeking seclusion in the Burren’s limestone wilderness. They were widely credited with bringing the slow-worms with them, as pets (as they were, indeed, for some of my schoolboy friends in Brighton).

The lizards have done well, if still rarely seen, and have spread – slowly, as one might imagine – to the Burren’s wilder margins. One was dropped by a heron on to a parked car in Galway, slightly denting the roof.