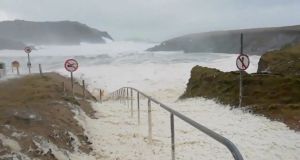 Met Éireann has issued weather warnings for many parts of the country with a combination of high winds, snow and ice forecast overnight with the risk of coastal flooding during Thursday.

A status orange wind warning has been issued for Donegal with stormy conditions and mean wind speeds of 60 to 75km/h expected with gusts of 100 to 120km/h forecast in the period up to noon. The warning will be valid from 8am to 12 noon on Thursday.

A status yellow snow/ice warning has also been issued for the county. It came into effect at 3pm on Wednesday and is valid until 8am on Thursday. Showers will turn increasingly wintry during Wednesday night with a mix of hail, sleet and snow, leading to icy conditions on untreated surfaces. Some localised accumulations will occur.

“Due to a combination of waves, spring tides and surge, the possibility of coastal flooding is increased on Thursday along western and northwestern coasts,” Met Éireann added.

A status yellow wind warning has also been issued for counties Cavan, Monaghan, Dublin, Louth, Meath, Galway, Leitrim, Mayo, Sligo and Clare with wind speeds of 50 to 65km/h and gusts of 80 to 110km/h forecast.

This warning is valid from 4am to 6pm on Thursday.

Showers in the West initially on Thursday will become widespread during the day. Some wintry falls will be possible too, mainly of sleet, with a risk of hail and thunder.