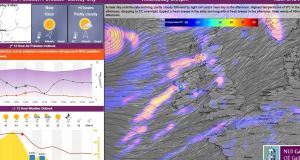 Known as StreamAIR, the technology devised by the Centre for Climate and Air Pollution Studies (C-CAPS) also provides indication of key drivers of air pollution and climate disruption.

A unique smartphone app which provides real-time weather forecasting combined with air quality indications, including risk of air pollution, has been developed by scientists at NUI Galway.

Known as StreamAIR, the technology devised by the Centre for Climate and Air Pollution Studies (C-CAPS) also provides indication of key drivers of air pollution and climate disruption.

A report last week confirmed air pollution is causing 8.8 million premature deaths globally every year – while those with predisposed conditions such as cardiovascular disease or asthma are especially vulnerable.

The app was built by a team based at Mace Head Atmospheric Research station in Connemara, Co Galway, which is an observation facility for global monitoring of the atmosphere.

The app, once fully released in coming weeks will provide pan-European cover and enables a user to focus in on a particular region or city, and in addition to tailored weather forecasts indicates air quality over the following 24 hours, centre director Prof Colin O’Dowd explained.

It is “really powerful” and yet accessible, he believed. While air pollution was widespread, up to now “the average person doesn’t know what causes it, or where it comes from”.

Focusing on Galway on Tuesday at lunch time it indicated: “Predicted air quality is satisfactory and will remain so for the next 24 hours.”

For those with underlying conditions, it is providing a more informed forecast, he said – as local conditions may impact on people’s exercising, mobility or commuting. It enables, for example, users to determine “route exposure” when walking or driving to school.

It identifies particulate matter (PM) levels, which can be highly toxic where it occurs in diesel emissions or from combustion engines.

Principal researcher on the project Dr Liz Coleman said the app not only has the potential to identify air pollution sources but also “the toxicity level of air pollution episodes”.

This information can be combined with exposure data to better inform the public of potential risks from a national level to a European scale, she added. “This enables users to protect their health by taking necessary precautions when a pollution event is forecasted on the app.”

On climate monitoring, Prof O’Dowd said: “Ireland and the world’s future can only be safeguarded by an immediate reduction in harmful emissions. Cleaner air can yield tangible co benefits for human health and for the planet quickly by reducing concentration of greenhouse gases (GHGs) responsible for climate change.”

Meeting obligations under the UN’s sustainable development goals was a major challenge for Ireland “but by using our technologies here in Galway, Ireland can accurately measure and report progress it is making.”

Mace Head is part of a series of networks contributing data and analysis with the aim of solving transboundary air pollution problems.

“The StreamAIR app is an extension of the Mace Head real-time data system, designed to fuse together real-time observation and forecast data on multiple platforms including mobile devices,” he said.

The facility has generated critical long-term data on GHGs, such has CO2, methane and ozone – as well as ozone-depleting substances such as CFCs, along with PM which can include “sulphate haze” producing acid rain.

These long-term trends have underpinned successful policy development and intervention to address acid rain and ozone-depletion issues, “but a lot of work still remains for GHG warming agents, driving global warming,” he said.

In fact, he said ozone was “a double agent”. While it is critical to have (stratospheric) ozone high in the sky to protect us from the sun’s harmful UV rays, at the surface, (tropospheric) ozone is a harmful air pollutant, causing premature deaths and mortality, and also a short-term warming agent (ie its lifetime is much shorter than CO2) in terms of global warming.

The StreamAIR app “brings the polluting agents and global warming agents together into the palm of everybody’s hand, emphasising both types of agents must be reduced”, he said.

The app can be downloaded from iTunes.