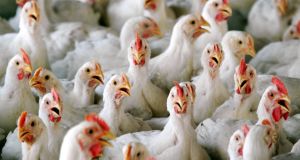 The Department of Agriculture has confirmed an outbreak of avian flu in a large commercial poultry flock in Co Monaghan, while three other flocks in the county are also being investigated for presence of the virus.

This form of bird flu, while highly infectious, does not kill birds in high numbers or pose a risk to human health.

Retailers in the west of Ireland have been advised by one Galway-based egg supplier that their main producer has reported an outbreak of the virus on their farm.

Shops were told: “We regret to inform you that our main egg supplier has bird flu. As a result of this, there will be a shortage of eggs.” The supplier said it was examining the possibility of sourcing eggs from the UK

“This subtype of avian influenza is not a notifiable disease and has no known public health risk nor international trade implications,” a department spokeswoman said.

Movement of poultry and poultry products onto and from the farm were subject to restriction while an investigation into the disease episode was underway.

“In these cases, the presenting clinical signs and preliminary laboratory results are such that low pathogenic H6N1 is likely to be the disease agent involved.”

Similar outbreaks were identified in Northern Ireland, Scotland and England over recent weeks.

The department urged poultry owners including backyard flock owners to be vigilant in implementing strict biosecurity on their premises, by ensuring only essential personnel, vehicles and equipment have access to their flocks and minimising contact between poultry and wild birds.

Flock-owners should also regularly monitor their birds for signs of disease. If they suspect avian flu they must report it immediately to their veterinarian or to a Regional Veterinary Office.

An outbreak of the more virulent H5N8 strain has occurred in central Europe with the number of outbreaks steadily increasing in recent weeks across seven countries.