Greta Thunberg to sail across Atlantic for UN climate summits 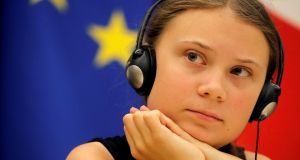 Greta Thunberg is to sail across the Atlantic in a high-speed racing yacht next month to attend UN climate summits in the US and Chile.

The journey will form part of a sabbatical year the 16-year-old Swedish climate activist will spend in the US.

“Good news! I’ll be joining the UN Climate Action Summit in New York, COP25 in Santiago – I’ve been offered a ride on the 60ft racing boat Malizia II. We’ll be sailing across the Atlantic Ocean from the UK to NYC in mid-August,” Greta tweeted. The journey will take two weeks.

The campaigner, whose solo protest last year sparked the Fridays for Future global school climate strike movement, said in June she would be taking a year off school to attend the summits, onSeptember 23rd in New York and December 2nd-13th in Santiago, which she described as “pretty much where our future will be decided”.

But she said she did not yet know how she was going to get there. “It’s on the other side of the Atlantic Ocean. And there are no trains going there. And since I don’t fly, because of the enormous climate impact of aviation, it’s going to be a challenge.”

Owned by a German property developer, Gerhard Senft, based in Brittany and sponsored by the Yacht Club de Monaco, the 18-metre (60ft) yacht is a high-speed planing monohull built for the 2016-17 single-handed, non-stop round-the-world Vendee Globe race. The club said on its Facebook page it was “honoured to be able to sail Greta Thunberg emission-free over the Atlantic”.

The yacht is fitted with solar panels and underwater turbines to generate zero-carbon electricity. Greta will be accompanied on the two-week voyage by a film-maker, her father, Svante, and Pierre Casiraghi, the grandson of Monaco’s late Prince Rainier III and the actor Grace Kelly.

Greta told the Associated Press before the announcement that she had not wanted to travel to the US by cruise ship because of their notoriously high emissions, while the Atlantic could be dangerous for sailing boats in August because of the high risk of hurricanes.

“Taking a boat to North America is basically impossible,” she said during her weekly Fridays for Future protest outside the Swedish parliament in Stockholm. “I have had countless people helping me, trying to contact different boats.”

In a joint Guardian interview with the US congresswoman Alexandria Ocasio-Cortez in June, Greta said of her planned visit to the UN climate summit: “I don’t fly for climate reasons so it’s not 100 per cent yet, but we are figuring it out. It’s very hard, but I think it should be possible.”

Referring to her congressional district, Ms Ocasio-Cortez said: “If you land in New York, we will give you a Queens welcome!”

After New York, where she will take part in several meetings and protests, Greta aims to travel by train and bus to the annual UN climate conference in Chile with stops in Canada, Mexico and other countries.

The activist, the daughter of an actor and an opera singer, has spoken to politicians at last year’s UN climate conference in Poland and to business leaders at the World Economic Forum in Davos. She has also met Pope Francis.

Greta, who has encountered fierce criticism from climate deniers and some politicians, told AP she was not sure how her message would go down in the US, where Donald Trump leads broad opposition to the radical measures scientists say are required to limit global warming.

She said meeting the US president would probably be “just a waste of time”, adding: “I have nothing to say to him. He obviously doesn’t listen to the science and the scientists. So why should I, a child with no proper education, be able to convince him?”

This weekend British Vogue said that Meghan, Duchess of Sussex, would be guest editor of its September issue and had chosen Greta as one of 15 women it described as the “trailblazing change-makers” who would feature on the cover. – Guardian