Paris records hottest day in history as it surpasses 42 degrees

Record temperatures recorded in Belgium, Germany and the Netherlands in heatwave linked to climate change 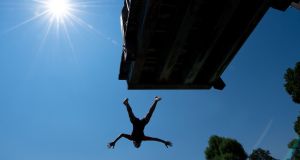 A boy jumps from a diving platform into the lake Ammersee in Utting, southern Germany. Photograph: Sven Hoppe/dpa/AFP 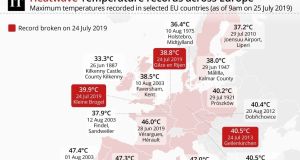 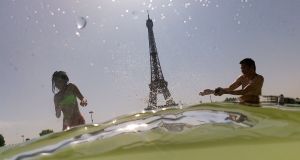 Trocadero Fountains next to the Eiffel Tower in Paris as a new heatwave hits Europe. Photograph: Dominique Faget/AFP/Getty

High temperatures broke records all over Europe on Thursday as the continent endured its second extreme heatwave in a month.

Belgium, France, Germany, the Netherlands and the UK all reported unprecedented heat levels, in some cases only one day after previous records were broken. Scientists linked the heatwave to global warming caused by fossil fuel emissions.

The thermometer reached 42.6 degrees in Paris, breaking the previous record of 40.4 C degrees set in July 1947. Metéo France, the French weather service, noted that 43 degrees is the average July temperature in Baghdad.

Twenty departments or administrative divisions in northern France were placed on red alert for the first time, meaning “absolute vigilance” is required to prevent power cuts and water shortages, and hospitals from being overwhelmed.

French media said the night from Wednesday to Thursday was the country’s hottest ever, and attributed five deaths to heatstroke.

The chief architect for Notre Dame Cathedral said joints and masonry that were soaked by firefighters in the April 15th blaze risked drying too quickly, bringing down the remaining shell of the monument.

The German weather service DWD said scalding air from the Sahara desert was hanging “like a bell” from the Mediterranean to Scandinavia, flanked by lower pressure zones in western Russia and the eastern Atlantic.

Robert Vautard of the French Laboratory of Climate and Environmental Science (LSCE) told France Info radio he expected heat waves “two to three degrees higher than those at present” by 2050. Heatwaves are a naturally occurring phenomenon, Mr Vautard said, but they were being amplified dramatically by global warming.

It was the highest recorded temperature in Belgium since measurements started there in 1833. The previous record for the Netherlands, 38.6 degrees, had stood for 75 years.

A Belgian zoo fed frozen chickens to tigers and frozen watermelons to bears to cool the animals down.

The British Met Office said the 36.9 degrees recorded at Heathrow was the highest temperature ever in the UK in July.

The hot spell disrupted rail traffic, with British trains slowing to prevent rails buckling in the heat. A Brussels to London Eurostar broke down, trapping passengers inside. The high-speed Thalys train service from Paris to Brussels and Amsterdam suspended ticket sales.

Electricity generation by nuclear power plants fell by 8 per cent in France, where eight reactors were slowed or shut down. The German electricity company said it would take its Grohnde reactor offline on Friday, because temperatures in the Weser river were too high.

A study by the British Met Office said heatwaves were 30 times more likely to occur than in 1750 because of the large amounts of carbon dioxide in the atmosphere. “This heatwave is exactly in line with climate change predictions,” Dr Karsten Haustein of the Environmental Change Institute at Oxford told Reuters.

A study by paleo-climatologists published by Nature and Nature Geoscience magazines on Wednesday said the earth was undergoing the hottest period in 2,000 years. The entire planet was affected, with the exception of Antarctica, and the rise in temperatures since the second half of the 20th century was unprecedented, it said.

Raphael Neukom of the University of Berne, the lead author of the Nature report, wrote that “natural factors cannot explain the speed and spatial structure of the present warming... Our results confirm implicitly that human activities are responsible for these changes.”