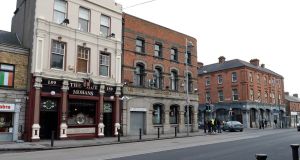 A multimillion-euro cycle path running along the back of Dublin’s Mountjoy Prison and underneath the North Circular Road, to allow cyclists to bypass Phibsborough village, has been included in new designs for the BusConnects programme.

The latest plans for the National Transport Authority’s (NTA) bus network redesign, seen by The Irish Times, include traffic calming measures along Phibsborough Road, pedestrian priority at Doyle’s Corner and speed reductions and tree planting to promote a “village feel” in the suburb.

Undoubtedly the most significant development in the proposals for Phibsborough is the creation of a new bypass for cyclists, which would link in with the ongoing development of the 145km Royal Canal Greenway.

Community organisation Phizzfest, which represents Phibsborough residents and businesses, said the original plans had made “no provision for cyclists and pedestrians and would leave them in a far worse position than they presently occupy”.

In a submission to the NTA, it said: “BusConnects is a badly thought-out set of plans that has a worthy objective (better city bus services) but is so one-eyed that its implementation would inflict massive damage on the people and the fabric of this city.”

However, following talks with the NTA, substantial revisions to the scheme have been produced. While cyclists will still have the option of using the dedicated cycling facilities along the bus lanes that will run from Ballymun and Finglas, a new cycle route is proposed to run from the Royal Canal near Cross Guns Bridge into Royal Canal Bank Park beside the old Phibsborough cinema building on the North Circular Road.

The route will involve the construction of a new cycle and pedestrian bridge over the canal east of Cross Guns Bridge, close to a planned MetroLink rail station.

This new bridge will lead onto Royal Canal Bank, a road which runs parallel to a wall of Mountjoy Prison. The route will then round Phibsborough library and continue on a new underpass of the North Circular Road into Royal Canal Bank Park, a linear park created in the 1930s when the Broadstone spur of the canal was filled in.

The park, which has previously been inaccessible to cyclists from the North Circular Road because of steps-only access down the side of the old cinema, will be accessible by a ramp from the road, as well as through the underpass.

“These are brilliant plans; millions of euro worth of investment will be going into the public realm in Phibsborough. Not only will this provide a safe alternative route for cyclists, it will see a fantastic esplanade developed around the underpass,” said Marian Fitzpatrick of Phizzfest.

The designs also see a major improvement for pedestrians at Doyle’s Corner with a “wraparound” pedestrian crossing, she said.

“This would mean that all of the traffic lights at the junction would go red at the same time, allowing pedestrians to cross the road diagonally. The same system has already been put in place at the junction of Dame Street and South Great George’s Street.”

There was also an argument, she said, for “red light cameras” to be installed at Doyle’s Corner, as traffic surveys have shown motorists frequently break the lights at this junction.

Speeds through the junction are also expected to be reduced to 30km/h, footpaths will be widened and tress planted. The designs also show new pedestrian crossings at several locations along Phibsborough Road.

“All these measures will slow traffic and give drivers the sense that they are entering a village,” Ms Fitzpatrick said. “The key thing is the NTA are meeting with us and, we feel, they are listening to us.”

The detailed designs of the BusConnects programme are expected to be published in September, and will be available for public consultation.