Could mass planting of trees provide a climate change solution? 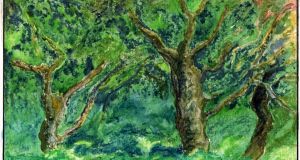 Last month, a study was published in the journal Science assessing the potential of aiming for a trillion trees on the planet

The first wind in weeks sent waves of silver skimming across the trees. Millions of flickering summer leaves, on less than an acre, breathing in CO2, hanging on to the carbon and kindly returning the oxygen.

No wonder restoring the world with trees seems such a promising idea. But how far would it really work in capturing atmospheric carbon and helping to slow climate change?

Last month, a study was published in the journal Science assessing the potential of aiming for a trillion trees on the planet. Led by Prof Tom Crowther at Switzerland’s ETH Zürich university, it used hi-res satellite imagery and Google Earth to find potential space for planting outside of urban settlements and cropland.

The study’s maps of potential tree cover show Ireland and the west of Britain full of unplanted land. But there are vastly bigger gaps in Russia, the US, Canada, Australia and elsewhere. In all, the search found almost a billion hectares across the world suitable for woodland and continuous forest.

With a doubling of trees to a trillion, said the study, the forests could store 205 billion tonnes of carbon, with potential to cut the atmospheric carbon pool by about 25 per cent. Crowther calls this “the best climate solution we have today”. He gives the obvious caution that new forests will take decades to mature, but his study attracted headlines across the world.

It has also generated much critical scientific comment. Some especially cogent analysis is at the website RealClimate. org, a forum for climate scientists. It challenges the potential contribution of even a trillion trees in 50 to 100 years’ time if the planet’s existing absorption, notably by the ocean, is taken into account.

RealClimate warns that trees planted in the far north would darken snowy tundra and thus absorb more warmth. This would thaw the permafrost that contains more carbon than all the trees on Earth together. “We’d be fools,” writes the lead commentator, Germany’s Prof Stefan Rahmstorf, “to wake this sleeping giant”.

The Crowther study is unclear on how much of the land it identifies would in reality be available for planting. Half at most, Rahmstorf would guess. He is all for “massive” new tree planting, but not in the high, perhaps illusory, hopes projected by Crowther. The first priority, Rahmstorf urges, must be ending the use of fossil fuels.

The Swiss researchers envisage a loose planting of trees on the grazing land of Ireland and the Netherlands. This would turn it into “savanna” a word more usually applied to the park-like mix of grassland and trees browsed by Africa’s elephants, giraffes and allied herbivores. It’s also the sort of natural, undramatic landscape that people seem to like most, as judged in several international studies.

Planting trees on grazing land is also the “agroforestry” proposed by Teagasc, Ireland’s farming research body. It matches much current European thinking. but the landscape it produces is not the pleasing scatter of trees that “savanna” might bring to mind.The species suggested by Teagasc include oak, sycamore and cherry, with 15 per cent of fruit and nut trees (the latter also a “green” enthusiasm).

The initial planting, of between 400 and 1,000 trees per hectare, would be equally spaced, and individually protected, in rows to allow grazing by cattle and sheep and the mowing of grass for silage in between. There are grants towards costs of establishment but, once planted, the agroforestry must remain.

Even without trees, the grasslands of Ireland can sequester, or fix, significant amounts of carbon in their soils. Research launched in 2017, led by Teagasc’s Prof Gary Lanigan, is measuring its limits and how best to manage farming to achieve them. Until such data on potential are produced, Ireland cannot use grassland storage to offset the heavy carbon emissions of the island’s farming.

A preceding study by the Environmental Protection Authority suggested that Irish soils may have “a uniquely high” carbon content because of the island’s wide use of grassland and year-round rainfall. But they also store a lot more.

Concentrations of carbon decrease with depth in the soil, as organic matter, such as leaf litter that earthworms drag down, diminishes. On croplands, harvesting takes the leaves off the land. And ploughing breaks up the soil structure that protects the carbon stores.

Conservation of a permanent vegetation cover is what’s needed, said the EPA survey team, along with deeper-rooted crops, minimal ploughing and better management of grazing.

Without grazing, no doubt, our grasslands would eventually sprout hawthorn, blackthorn, hazel and gorse in a disorderly Irish savanna. But as the national cattle herd is much reduced, fed seaweed to neutralise its gaseous belching, and learns to line up in the shade of marshalled cherry trees, farming may yet achieve the carbon-sequestering savanna that will help to save us all.