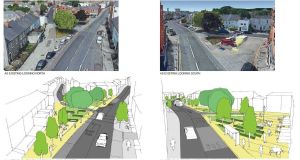 A new “green” pedestrian and cycle plaza, with flowers, ornamental hedges, trees and cafe-style public seating, has been designed for Stoneybatter as part of the BusConnects programme.

The National Transport Authority (NTA) intends to run a core bus corridor from Blanchardstown to the city centre through Stoneybatter. However, when its plans were revealed earlier this year, local residents and businesses protested, saying it would have a “devastating impact” on the urban village.

Their concerns centred on the loss of green space, the felling of trees, the reduction of pavement widths, and the removal of street parking and loading bays.

The NTA has revised its designs in response. It plans to create a new triangular plaza at the junction of Prussia Street, Aughrim Street and Manor Street, which it describes as a “green square” that will have shared pedestrian and cyclist use and extensive planting of trees, shrubs and flowers. A current car park and through-road in front of Kavanagh’s pub will become part of the plaza and could be a “local hub for passive recreation and host various events”.

However, to implement these changes, private cars would need to be restricted.

Southbound traffic from the North Circular Road would be restricted to local access only on Prussia Street, to access the Park shopping centre or streets such as St Joseph’s Road with “no direct access to Stoneybatter”.

Access to Stoneybatter from North Circular Road direction would be via Infirmary Road, Parkgate Street, North Quays and Blackhall Place – a detour of almost 3km.

Motorists travelling north through Stoneybatter from the quays will have to turn left onto Aughrim Street, which will become a one-way street.

Labour councillor and chairman of Stoneybatter Pride of Place Joe Costello said while there had been “welcome improvements”, a lot of issues remained unresolved.

“There are quite a few areas that need clarification: funnelling all the car traffic coming from town into Aughrim Street poses a problem; similarly, there are clarifications needed in relation to St Joseph’s Road.”

Dublin City Council had previously considered making Aughrim Street one way but abandoned the idea because of the problems it would cause for residents, he said.

BusConnects was “the right idea” Mr Costello said, but a more holistic traffic and transport plan needed to be put in place for it to work.

“Park and ride facilities at rail hubs, and congestion charges need to be looked at to take the burden of commuter traffic off little villages. Otherwise there is a danger of unintended consequences, of creating traffic bottlenecks and rat runs.”

“The NTA have shown a willingness to listen. I would still love to see greater protection of cyclists, but from where we were, this is a huge step forward.”

The community had been misunderstood as being opposed to BusConnects, she said. “As a community we are very pro-public transport. If you travel by private car, yes this will involve a detour, but this is a community with low levels of car ownership.”

The NTA will be holding a new round of public consultation on its BusConnects programme in the autumn.