Refusal for conversion of offices to Airbnb-style rental 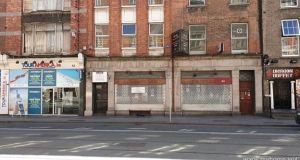 Collen Assets pointed out that the property on Middle Abbey Street was in the ‘heart of the city’ surrounded by hotels, cafes, restaurants and shopping streets.

Plans to convert a city centre office building in Dublin into Airbnb holiday rental apartments have been refused by Dublin City Council, even though the building is not in residential use.

Since July 1st, owners of properties in rent pressure zones have to get planning permission to use their housing for short-term lets for more than three months every year.

Homeowners who want to rent out a room or rent their entire home for less than three months do not need planning permission, but must register with their local authority.

Companies and individuals who run holiday lets all year round as a business had, since last year, been applying for permission ahead of the July deadline.

The city council has in recent months refused several applications to use apartments, which could provide long-term rental homes, for short-term lets. However, it had not previously refused permission for an office building to be converted into holiday apartments.

Collen Assets Trading applied in May to convert the upper three floors of offices at 60 and 61 Middle Abbey Street into nine apartments for use as short-term rentals. Two would have been studios, with four one-beds and three two-bed apartments.

The two buildings, which face the Red Luas line, are beside Tour America travel agency and close to the back entrance of Arnotts department store. A tailor’s service has most recently operated on the upper floor of one of the buildings, with JJ Lalor’s printers having last year vacated the ground floor of both buildings. However, most of the property has been empty or used for storage for several years.

In 2015 a previous owner was granted permission to substantially demolish the buildings, parts of which date from the 18th century, and replace them with a six-storey office block, but the development never went ahead.

In its application Collen Assets pointed out that the property was in the “heart of the city” surrounded by hotels, cafes, restaurants and shopping streets, close to visitor attractions and “as a consequence, there is a demand for short-term letting apartments at this location”.

However, the council said the building was in a “rent pressure zone” and the applicant “did not provide a justification for not providing long-term residential accommodation at this location”.

The council acknowledged the need for extra tourist accommodation, but it said the Middle Abbey Street plan would lead to a cut in the amount of long-term and secure accommodation that will be available in the city centre”.

If approved, the holiday lets would undermine the progress being made to get more people to live in the city centre in the upper floors over shops, through programmes such as the Living City tax incentive initiative.

It would result, too, in an “unwanted precedent for similar type development which may then result in the further unacceptable loss of potential existing long-term residential rental properties in the locality”.

Collen Assets could appeal the council’s ruling to An Bord Pleanála. However, the company could not be contacted for comment.