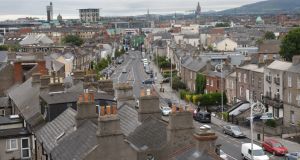 A one-way traffic system designed for Dublin’s Stoneybatter, as part of the BusConnects programme, would force motorists into a detour of almost 3km, through some of the worst traffic in the capital’s inner city.

Residents of the urban village last March protested against the National Transport Authority’s (NTA) initial BusConnects plans which would have resulted in the felling of trees, and the removal of parking and loading bays on Manor Street.

The NTA has produced revised designs which increase the amount of green space, involve the planting of more trees, and retain street parking spaces. However, as a trade-off, private car owners will no longer be permitted to drive from the North Circular Road to Manor Street.

The new plan involves a “bus gate” on Prussia Street south of the Park shopping centre. Motorists at Hanlon’s Corner will be directed along the North Circular Road towards the Phoenix Park where they will turn left down Infirmary Road and left again onto the quays from Parkgate Street. By turning left again onto Blackhall Place at James Joyce Bridge, they will be able to drive north to Manor Street.

In total, the detour would be between 2.5km and 3km, depending on which part of Manor Street the motorist wished to access.

A spokeswoman for BusConnects said the changes would preserve local access to streets such as St Joseph’s Road, but the “significant public realm improvement” which offered “great potential” for Stoneybatter could not be implemented if through-traffic continued to travel south down Manor Street.