A huge protest will precede the upcoming UN Climate Summit. Can it effect change? 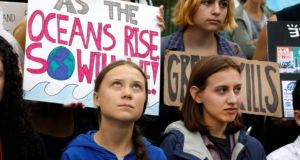 The issue has encroached on public consciousness on a global scale fuelled by ‘the Thunberg effect’. Photograph: Richard Drew/AP Photo

The world will witness a climate protest like never before on September 20th, when young people in their millions will shout loudest. Three days later, the UN Climate Summit takes place in New York, where world leaders will declare their commitments to specific climate actions.

And New York – with Swedish teenager Greta Thunberg at the frontline – will be the scene of the largest gathering of protesters: a reminder to world leaders that this time, you must mean it; we must act together to ensure global heating is contained.

Protesters will demand economies decarbonise more quickly. They will seek greater acceptance that human consumption has to change, and that the fossil fuel era has to be brought to an end. There will be condemnation of governments who deny the science, notably the US and Brazil, and of those who advocate climate action and yet subsidise the fossil fuel industry.

There are exuberant believers that technology will solve all, even if solutions are not yet identified

The world is at a particular juncture in responding to the threat of climate catastrophe. Eight year-olds now have an impressive – if basic – understanding of climate science and what needs to be done. The issue has encroached on public consciousness on a global scale fuelled by “the Thunberg effect”.

Young people are displaying a growing impatience with politicians. Climate denialism has been largely confined to populist, autocratic political leaders, who are light on science and light on policy. But consciousness has not translated into lifestyle changes or governments delivering promises they have made.

This prompts the question: how much destruction is needed for the world to take climate change seriously?

Recall what the world has just witnessed: The lungs of the Earth have been on fire. Europe has endured extreme heatwaves; a vast area north of Bordeaux up to Amsterdam experienced more than 40 degrees this summer. Predictions that rising temperatures will make hurricanes more devastating came true – Dorian provides proof. Evidence is in plain sight of ice sheets in Greenland melting much faster than anticipated.

The UN has declared: “Global emissions are reaching record levels with no sign of peaking. The past four years were the four hottest on record, winter temperatures in the Arctic have risen by 3 degrees since 1990 . . .We are starting to see the life-threatening impact of climate change”. It is “costing us dearly today with the prospect of even more tomorrow”.

The Global Commission on Adaptation summarised where we are: “The climate crisis is here, now: massive wildfires ravage fragile habitats, city taps run dry, droughts scorch the land and massive floods destroy people’s homes and livelihoods. So far the response has been gravely insufficient.”

Yet what needs to happen to shift the status quo?

It doesn’t help that the debate is increasingly polarised. On one side are doomsayers predicting the end of existence, and insisting human activity be radically curtailed. They embrace “degrowth” and “flight shaming”.

On the other are exuberant believers that technology will solve all, even if solutions are not yet identified.

Science says affordable, scalable solutions are available now that would enable us all to leapfrog to cleaner, more resilient economies. If we act now, we can reduce emissions and hold the increase in the global average temperature rise to below 2 degrees.

The next steps, however, would have to be co-ordinated across the planet at an unprecedented scale – backed by a genuine and sustained commitment to our shared humanity.

Protest needs to translate into political choices that lead to policy change, says climate activist Lorna Gold – “That has started.” The Green Wave evident in recent elections “was a little over-egged” but signalled to powers that be that climate action is a top priority for voters.

This is bigger than everyone voting for the Green Party, she stresses. It’s about priorities in all parties, and giving a clear mandate to the next government to make those difficult choices. “That is where the rubber hits the road.”

Ireland’s Climate Action Plan is in place but is “barely playing catch-up”. It needs to go further because as it stands 2030 targets will not be met. This is the context of Europe pushing to increase 2030 targets.“I want the Taoiseach to stand up at the climate summit and back the EU president’s call for increased ambition. Otherwise the Paris Agreement – the UN’s ambitious 2016 accord – is dead in the water.”

Gold worries for young people, especially Thunberg, in the face of sometimes vicious criticism; but she is grateful that she has a good team around her and support from parents. That is why as a parent she stood with schools climate strikers almost every Friday for the past 40 weeks.

She recognises “eco-anxiety” in young people. “The solution isn’t to sit back and let them get on with it. The burden is too much.” Parents should be standing alongside their children and declaring their support.

Gold admits to feeling rising despair in the face of what is happening to the planet. The antidote to anxiety, she feels, is “people pulling together”.

As for those who question the merits of individual action when mega-emitters continue to pollute the world, she responds: “Every emission matters. Every day matters. Everything we do matters at this point.” There is also a moral imperative, she says – “how will you respond when your grandchildren ask, ‘what did you do to arrest climate disruption?’ It’s about integrity. I’m doing everything to change lifestyle, to make it as eco-friendly as possible.”

This is despite the system undermining her ability to make the right choices. She laughed when Dublin Airport announced it was getting rid of plastic bottles and shouted, “what about the planes in the sky?”

But the committed have to live with those contradictions, she says. She is a pragmatist recognising the need for dramatic changes but not in the “stop doing everything now” camp, though the question of how to square economic growth with maintaining wellbeing, while easing the addiction to consumerism, remains unresolved.

Environmentalist and UCD lecturer Sadhbh O’Neill acknowledges recent success in raising consciousness. But in spite of protests “forced right under the noses of people”, many are still in denial about what needs to be done, and that requires having a difficult conversation, she contends.

Extinction Rebellion – the civil disobedience group that this year staged high-profile protests against climate breakdown – has got people to face reality, O’Neill believes. Their purpose was not to have a little protest or petition. Climate was a non-issue, now it’s “problematised” with acknowledgment that there is a systemic problem, that there are no quick fixes and that everything has to change.

“It makes no sense to be pessimistic or optimistic about the warming we know is going to happen,” O’Neill says. “It’s terrifying, in scale and impacts, and fear is an understandable and human response. But the antidote to fear is not hope, but courage.”

Fear and anxiety are reduced by “becoming involved and doing things with others. It lifts us out of despair. So what we can be pessimistic or optimistic about are the prospects for transformative social change and political action,” she says.

“There are plenty of examples of this in human history: emperors and tyrants have been toppled, colonial powers driven out peacefully, civil rights won – all with mass civil participation and direct non-violent action . . . So we know big changes can come about rapidly, and often quite suddenly, when ordinary people step up and refuse to accept the nonsense from our political leaders that climate action is unpopular, too difficult or expensive.”

Looking at the international picture, climate policy specialist Dr Joseph Curtin is pessimistic, though he remains convinced of “the absolute need for multilateralism” to tackle climate change and find solutions. The EU has been the only bloc globally to achieve significant decarbonisation, which he attributes to the entrepreneurial role played by the European Commission in its dealings with members states.

The Paris Agreement was the high water mark and is a good framework for action. “But when the strongest, richest, most important, pivotal country [ie the US] walks away from the table, and does everything to poison progress, while promoting fossil fuels rather than decarbonisation, it’s impossible to get around that.”

UN secretary general António Guterres, who is hosting the summit, is demanding countries still committed to the agreement adhere to timelines and increase ambition in line with commitments to scale up pledges next year.

But that impasse will overhang the summit, Curtin predicts. The EU will make soothing noises about carbon neutrality, China will make a gesture but “countries will not commit with increased ambition when the US is playing this spoiling role”. Meanwhile, an informal obstructionist alliance of Saudi Arabia, Russia, Brazil and Australia compounds the difficulty.

Curtin says domestic US politics is key to unblocking that impasse. “If Trump is re-elected next year, there is no way forward for the international community.”

He is optimistic in the sense that every leading Democratic presidential candidate “is now a climate hawk with a credible climate platform”.

The need for political action and international co-operation remains as vital as ever. Sadhbh O’Neill suggests individuals “roll up their sleeves and get things done with a sense of courage and necessity now, rather than doing this ‘when I feel good about it’”.

It is going to make some people uncomfortable, including those who drive fossil-fuelled SUVs and have three foreign holidays a year, as they will need to shed much of their “consumerist load”. This has to happen, she says, because the alternative is catastrophe.