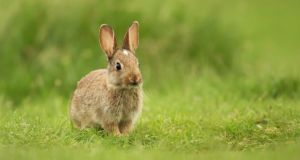 Rabbit haemorrhagic disease causes death within a few days of infection, with sick animals having swollen eyelids, partial paralysis and bleeding from the eyes and mouth. Photograph: iStock

A new case of a deadly disease found in rabbits and hares has been confirmed in Cork, bringing the number of counties in which the virus has been detected to five.

Rabbit Haemorrhagic Disease (RHD) killed millions of animals in China when it was first identified in 1984. It subsequently spread to continental Europe and was first detected in the wild in Ireland last July.

The virus, which poses no risk to humans, causes death within a few days of infection. Diseased animals exhibit swollen eyelids, partial paralysis and bleeding from the eyes and mouth.

It was confirmed in wild rabbits in Co Wicklow and Co Clare in July, and a hare in Co Wexford was found to be infected with the disease in August. The virus has also been found in Co Leitrim.

Minister for Heritage Josepha Madigan confirmed the latest case in Co Cork in response to a parliamentary question from Clare TD Michael Harty.

“While all locations [in which the virus has been found] continue to support apparently healthy wild populations, officials from the National Parks and Wildlife Service of my department continue to monitor the situation,” she said.

In an effort to control the spread of the disease, the department recently decided to suspend licences issued to the Irish Coursing Club for the capture and tagging of hares for the 2019/20 hare coursing season.

“The disease is highly contagious and can be spread directly between animals and in the faeces and urine of infected animals, as well as by insects and on human clothing,” said Mr Madigan.

She said that the suspension of coursing licences would remain in place until a clearer understanding of the extent, spread and implications of the virus outbreak emerges.

RHD killed 14 million domesticated or farmed rabbits within nine months of its emergence in China in 1984. It was detected in Europe in 1988, and had spread to 40 countries by the late 1990s.