How ballooning spiders fly through the sky 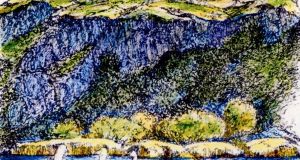 Swan lake – where the gossamer gleamed.

Abroad on a calm and meditative morning, walking a path between damp hedges, the faintest, softest touch on my cheek confirmed that it was autumn. I had collided, to put it clumsily, with a gossamer thread stretching skywards from a spider.

Given the arachnophobia that can hurry me past some of the images sent to Ethna’s “Eye on Nature”, my interest in the lives of flying spiders may seem odd. But their species are mostly small, at least by tarantula standards. Besides, the “ballooning” of spiders – the term science prefers – has been a hot topic since Darwin, with new and revelatory insights emerging even today.

My first, rapt sighting of a massed flight of spiders came many autumns ago, over at the lake where the fluting calls of whooper swans echo from a sheltering cliff. The cliff face was dark and the sun peered over its rim, silvering the hundreds of shining gossamer threads that hung almost vertically in almost still air above the water.

The generally accepted story of how a spider takes flight, current since the early 1800s, is already weirdly wonderful but quite imaginable. One can picture the animal testing a light wind with a fingertip, then climbing to the top of a fence post to tilt its abdomen skywards, extruding strands of silk into the breeze. This catches at the gossamer, helping to draw it out, and then, when long enough, lifts the spider into the sky.

Its journey can last thousands of kilometres, drifting over oceans and reaching heights of 4km. Whatever its purpose – new food, habitat, opportunities for sex – its chances of fulfilment can seem at least random.

But there are bold new insights into the spiders’ aeronautics.

They link to some of Charles Darwin’s observations when aboard HMS Beagle on its South American voyage in the 1830s. About 100km off Argentina, the ship was inundated with ballooning spiders, some tiny juveniles and others around 7mm.

The fallen flights of threads, catching beads of dew or mist, can set grassland gleaming beautifully

Darwin described watching one of the small ones “elevate its abdomen, send forth a thread, and then sail away horizontally, but with a rapidity which was quite unaccountable”. A larger one, “while standing on the summit of a post, darted four or five threads from its spinners. These . . . diverged in an ascending direction from the orifices. The spider then suddenly let go of its hold on the post and was quickly borne out of sight. The day was hot and apparently quite calm . . .”

The naturalist found both of these accelerated take-offs “inexplicable”. But research now proposes a boost to lift-off quite independent of the wind: the Earth’s fields of atmospheric electricity. Darwin himself wondered if some near-imperceptible “thermal” of hot air could have lifted the bigger spider’s fan of threads. He noted that their spread might be caused by electrostatic repulsion.

Bolts of lightning from thunderstorms are what most of us know about the forces in the planet’s electrical field. There is a gradient between the negative charge of the planet’s surface and the positive upper reaches of the atmosphere, affected by local meteorological changes.

The silk extruded by a spider bent upon ballooning takes on a negative charge and this repels, electrostatically, the charge in whatever they’re perched upon. The higher the perch the better, and the force created can lift them into the air.

This has been shown experimentally by Erica Morley and Daniel Robert at the University of Bristol, who tested it on spiders perched in a box in which the electrical gradient was created. The spiders, they found, could detect the electrical field, alerted by the bristling of hair-shaped sensors on their legs, called trichobothria. They raised on tiptoe and attempted – many successfully – to lift into the air, then dropped back when the current was switched off.

What goes up does indeed come down, and among the matchless observations of the naturalist Gilbert White was an account, in September 1741, of the problems that fallen gossamer showers made for his hunting dogs. “Their eyes were so blinded and hood-winked,” he wrote, “that they were obliged to lie down and scrape the encumbrances from their faces with their fore-feet.”

The fallen flights of threads, however, catching beads of dew or mist, can set grassland gleaming beautifully. An early letter to “Eye on Nature” came from a Dublin reader, reporting on his discovery in the Phoenix Park one morning in December: “an infinity of strands of silk stretched upon the grass as far as the eye could see. Close by, they shimmered in the sunlight like a moonlit sea . . .”