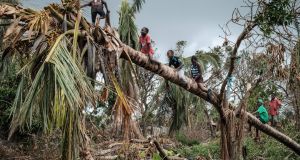 Damaged coconut tree in Mozambique: 2019 was the second-hottest year on record, with a global average temperature of 1.1 degrees above pre-industrial levels. Photograph: Yasuyoshi Chiba

The world is “way off-track” for meeting targets to curb rising temperatures as the signs of climate disruption increase, the United Nations has warned in its evaluation of global heating trends in 2019.

A projected 22 million people were displaced; up from 17.2 million on 2018 with rising hunger and loss of life caused by extreme temperatures and floods around the world.

Last year was the second-hottest year on record, with a global average temperature of 1.1 degrees above pre-industrial levels, the WMO’s statement on the state of the climate on Earth confirms.

The world is “way off-track” in dealing with the climate emergency and time is fast running out, UN secretary general António Guterres warned on Tuesday in response.

WMO scientists said the threat was greater than that from the coronavirus, and world leaders must not be diverted away from decisive climate action. UN agencies for environment, food, health, disasters, migration and refugees, as well as scientific centres, contributed to the research.

In 2019 oceans were at the hottest on record, with at least 84 per cent of seas experiencing one or more marine heatwaves. Surface air temperatures around the world were the hottest ever recorded.

The 2018-2019 period was the 32nd year in a row in which more ice was lost than gained. The melting of land ice combined with thermal expansion of water pushed sea levels up to the highest mark since records began. The long-term decline of Arctic sea ice also continued.

“Climate change is the defining challenge of our time. We are currently way off-track to meeting either the 1.5-degree or 2-degree targets that the Paris Agreement calls for,” Mr Guterres said. “Time is fast running out for us to avert the worst impacts of climate disruption and protect our societies.”

More ambition on emission cuts, adaptation to make the world more climate resilient and finance were needed in time for the key climate conference, COP26, in Glasgow next November. “That is the only way to ensure a safer, more prosperous and sustainable future for all people on a healthy planet.”

Meanwhile a UK study has concluded “climate neutrality” is unlikely to be achieved in Britain by 2050 without drastic technological and societal changes including “banning aviation and meat production”.

Such a target would require innovation in low carbon technology and adoption of “significant” land use and lifestyle changes.

It urges the government to invest significantly in “carbon capture”, hydrogen and advanced nuclear technologies, as electricity generation will need to double in order to meet the proposed target. – Additional reporting Guardian