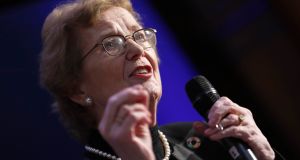 Mary Robinson: ‘I have become in the past year a fearless woman, a connected woman and a dangerous woman.’ File photograph: Finbarr O’Rourke

Former president Mary Robinson has said she has been trying to reconcile why the world was collectively addressing the coronavirus threat by changing behaviours and habits, but had yet to respond to the climate crisis in a similar way.

There were lessons to be learned from how people had responded so effectively to Covid-19, which was also “a real threat”, she said during an address to the Lions National Convention in Ballina, Co Mayo.

Given her concerns about climate, she had come to the realisation she should travel less and make more use of technology, such as video-conferencing.

She regretted the climate crisis had not topped the agenda during the recent general election.

However, it was not as divisive an issue in Ireland as it was in the US, she believed. “In many ways that is why it was not such a big issue in the election... whereas the issues of health and housing were very much on the front of people’s minds.”

Much work remained to be done on climate; while “the EU would drag us in the right direction”, she predicted, the price of political inaction would be substantial fines for the country.

Climate action was not just about implementing “the Government’s climate action plan” or about putting a price on carbon in the form of a tax that was fairly applied; it had to involve action across society, said the former UN climate envoy.

She was heartened by the scale of actions reflected in Chambers Ireland embracing the UN sustainable development goals, with towns such as Kinsale becoming plastic-free, as well as increased divestment from fossil fuels.

Women were beginning to take the climate issue really seriously in Europe and the US, whereas in Africa and Asia they had done so for quite some time because they saw the impact on the ground. In the developed world, women had been prepared to to speak out eloquently on issues such as the #MeToo movement; discrimination; gender violence; education and health, but less so on climate.

While men had to be part of the solution, women already had an acute sense of “the finite time we have”, Mrs Robinson said. It was women in the developing world who were building resilience to climate disruption in their communities.

On the climate cause, she added: “I have become in the past year a fearless woman, a connected woman and a dangerous woman.”

While women were engaged on the issue, she confirmed that at least a dozen times in the past year she was approached by women who said they were not going to bring children into the world because of “the hellish future ahead” – as they perceived it. “It breaks my heart,” she added.