Before and after: Flood waters badly damage former home of William Butler Yeats

Thoor Ballylee at Gort in County Galway renovated last year at a cost of €70,000 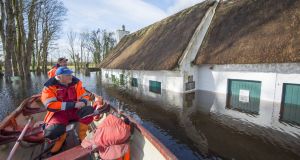 Extensive damage has been done to the former home of William Butler Yeats, which has been submerged under six feet of water for more than a week.

Thoor Ballylee at Gort in County Galway was purchased by the Nobel Prize winning poet in 1916 and was used during his many visits to Lady Gregory at nearby Coole Park in the 1920s and 30s.

The 15th century castle, known locally as Yeats’ Tower, and an attached cottage and studio have flooded on a number of occasions in recent years — most recently in 2015.

The Yeats Thoor Ballylee Society, which operates the property as a cultural centre and tourist attraction, last year spent €70,000 renovating the studio at Thoor Ballylee.

Colm Farrell, a board member of the Yeats Thoor Ballylee Society, says that the group were assured that drainage works carried out in the wake of the 2015 flood would prevent future flooding.

The flooding began on February 24th when the Cloone River, which runs alongside Thoor Ballylee, rose by more than 10 feet in a matter of hours.

“We were promised after 2015 that because of drainage works that had been carried out, that it would never be flooded again,” said Mr Farrell.

“We thought the problem was fixed, so last year we went ahead with a €70,000 renovation of the studio attached to the cottage and tower. We understood from the politicians that the problem had been fixed after 2015. We got as far as February this year without anything happening, we thought we were out of the woods, and then this flood hits overnight.

“It was incredibly sudden. I’ve never seen anything like it. The water came like a shot, pretty much overnight.”

The tower, which is not insured for flooding, is expected to be inaccessible for a number of weeks until the flood waters recede. The Yeats Thoor Ballylee Society has already received offers of financial support from patrons in America to undertake fresh renovations.

“We have no insurance. The insurance for this site ran out 15 years ago and there is no way that we would ever get cover for flooding again.

“We have had offers of help [to fund repairs]. We have some great friends in America and around the world. A number of people have already been in touch with offers of support to get the clean up done and get the place opened again.”

Owned by Fáilte Ireland, the Yeats Thoor Ballylee Society secured a long term lease on the property in 2010. It has attracted thousands of tourists to the area each year since 2010, including a large number of American visitors.

In 2014, Gort was identified by the Commission for the Economic Development for Rural Areas (CEDRA) as the Irish town worst affected by the economic recession.

“We have been quite successful with the place since we took over in 2010, except that it flooded again in 2015,” said Mr Farrell.

“Since we have reopened it, we’ve had 3,000 to 4,000 visitors every summer. We only open from April to September so this is a significant number of tourists for a town like Gort.

“It’s been an unbelievable success for Gort with the history of Yeats, Coole Park and connection to the whole area. I don’t think a lot of people here realise how well he is known all over the world. It’s been a great success.”

Thoor Ballylee Castle was built in 1485 and was owned by Yeats from 1916 until his death in 1939. The attached cottage and studio was built in the early 1800s.