Flooding: ‘It will be April before the floodwaters go down’

Jennifer O'Connell in Clare and Galway 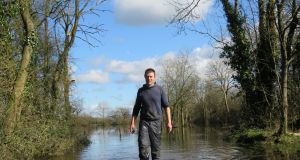 Pat Crowe standing on a flooded laneway on his farm in Springfield, Co Clare. Two-thirds of his 150-acre farm are under water. Photograph: Jennifer O’Connell/The Irish Times

“We’re looking at this for another month,” says Pat Crowe, pointing towards the flooding that has submerged 100 acres of his 150-acre dairy farm near Springfield in Co Clare.

As the floodwaters recede from the households nearby, he suspects that the media attention will too. “And the farmer is forgotten about.”

But for Crowe and other farmers in the area, the crisis is far from over.

“It started to drop a bit this week, but it will be April before the floodwaters go down, and what will be left after is dead ground.”

After that, he’s facing reseeding the land, and it will be May before he can get his dairy herd back out grazing. In the meantime, the herd still has to be fed. That means relying on 10 to 15 bales of silage every day, at a cost of some €9,000 per month.

“The Shannon is choked,” he says. He wants to see the river dredged and cleaned, part of a solution also advocated by local residents and Declan Murphy, an environment and technology advisor with Teagasc. “There’s been no maintenance on the river since the foundation of the State,” says Murphy.

Murphy pulls up Google Maps on his phone to demonstrate the pinch points and bottlenecks where the river has narrowed over the years, through overgrown vegetation and small islands. Add to that heavier-than-average rainfall, and the catastrophic result is spreading out behind Crowe’s land, where only the tops of trees are visible in places.

“We used to get this kind of rainfall every decade. We’ve had it five times in the last seven years. It’s had a massive impact on farming life. Dairy farmers should be getting cows out from February 1st, but unless they’re doing underwater grazing, you can’t do it,” says Murphy.

When he talks to farmers in the region, “there is absolute despair in their voices.”

It was the Shannon flooding that occupied most of the recent national news coverage, but, further north, in parts of the lowlands around Gort in Co Galway, the floodwaters continued to rise throughout the last week. There is no major overground river here to burst its banks, but the water keeps coming, rising up from underground drainage systems and spilling out of overflowing turloughs.

The house I was born in was over there. It was there 200 years, and it never flooded

He points to a block he has placed in the middle of a field he is using to measure the rising floodwaters that have already submerged 100 acres of his farm. McInerney expects the levels to keep rising for another 10 days. “That’s the rain that fell up in the mountain last week,” he says, looking in the direction of the Slieve Aughty mountains.

Heavier rainfall events over the past 20 years have meant that existing subterranean network of rivers are overflowing. McInerney and others in the area believe works carried out on the controversial Derrybrien windfarm may have exacerbated the issue.

The State has just paid a fine of €5 million to the EU, as a result of its failure to carry out a proper environmental impact assessment (EIA) on the windfarm. Since November 2019, it is also facing ongoing daily fines of €15,000. Campaigner David Murray, chair of the South Galway Flood Relief Committee, estimates the total fines paid at €6 million plus ongoing daily fines.

People in the area contend that since the mountain hydrology has changed because of the windfarm, the water comes down much faster. Volumes of water that would have taken weeks before can now arrive in hours, locals claim.

McInerney points to the middle of the lake that has appeared behind his house, cutting it off from the homes of his two sons and daughters. “The house I was born in was over there,” he says, pointing to a spot now completely submerged. “It was there 200 years, and it never flooded.”

Video released during the week showed the nearby home of William Butler Yeats, which was renovated last year at a cost of €70,000 after earlier flooding, submerged under six feet of water. McInerney has been here before, too.

Thirty roads in the area are closed off. Since the flooding, “my daughter, Niamh, she’d be driving an extra 300km a week just taking her kids to creche and school and herself to work.”

The water came in eight days. It rose about 12 inches a day. And it will just sit there for weeks

McInerney and his neighbours 8km away, Micheál and Ann Flaherty, are awaiting the results of a feasibility study by Galway County Council and the Office of Public Works (OPW) on whether to proceed with a flood relief scheme for the area.

The Flahertys walk into the yard at their farm at Tirneevin, on the Clare-Galway border, half of which is submerged. “The water came in eight days. It rose about 12 inches a day. And it will just sit there for weeks,” says Micheál Flaherty.

Today is the first day the water level has been stable. “The fact that it stays so long, and we’re looking at it all the time...” He shakes his head in wordless despair.

What should be done?

“I’m not an engineer. But there’s thousands of acres flooded. There’s no overground river. And we’re less than a mile and a half from the sea. You’re only talking about putting in a small channel just to not let it build up,” he says.

“There is a technical solution to the problem,” agrees Murray. It involves creating new channels for the water to drain into the sea.

“But we’re being held against a cost-benefit criteria. It’s very frustrating to be measured in that way, especially when we’re effectively throwing taxpayers’ money away on windfarm fines.”