Political headwinds against radical change, especially from the US, may frustrate agenda

Over 10,000 people turned out for the climate strike protest in Dublin and millions of people took to the streets across the world in what could be the largest climate protest in history. 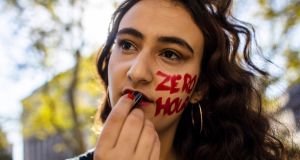 Too late? A protester on a rally against climate change inaction in Manhattan, on Friday. Photograph: Brittainy Newman/ New York Times

The scale of climate protests globally has heaped much additional pressure on global leaders meeting in New York this weekend to make more meaningful commitments to reduce carbon emissions dramatically.

UN secretary-general António Guterres has repeatedly told heads of state they should only come to his special summit on Monday if they have concrete commitments for a full transition to sustainable development.

To reinforce the point this week, he said he did not want any fancy speeches. Only countries that have promised meaningful new pledges will be allowed one of the three-minute speaking slots throughout the day. The Taoiseach has been given his slot – an indication of approval.

But the political headwinds are against Guterres. The US, the world’s second biggest emitter, is aggressively backsliding on its commitment to the Paris Agreement on lessening the effects of climate change.

EU leaders have shown a willingness to raise their ambitions. But they are not at a point in their political cycle to come with firm plans – other than confirming substantially increased emissions reduction targets up to 2030. Emerging economies have sent lukewarm signals.

UN special envoy Luis de Alba assured reporters he was “very confident” that China – the world’s biggest carbon emitter – would bring “a much higher level of ambition” to the meeting.

The heads of state, nonetheless, are expected to take the podium to announce, if not more ambitious plans, “commitments to make new commitments”, at least in time for climate talks next year to embrace more demanding Paris Agreement targets.

They will be in listening mode today as the UN Youth Climate Summit takes place. Ireland has been asked to co-host a “youth and public mobilisation” seminar under the Guterres initiative, which will make recommendations on how young people can be involved more in determining national policies.

Irish climate policy specialist Dr Joseph Curtin, who is based in New York, said “the elephant not in the room” – the United States – would prove very hard to work around. He said Guterres was to be commended for his constant pushing, but the EU and US working together was the only mechanism that would really kick start the process.

“Hopefully, that will happen in 2021 but it’s important that the groundwork is done now,” he added.

Dr Curtin said that axis would ensure massive investment was diverted into green finance and climate resilience at the scale necessary. As a consequence, Ireland has a key role in the post-Brexit world “as a friend of the US at the heart of the EU”, he said.

Within that relationship, he said Ireland had to be honest and “accept we have struggled too” in reducing emissions, and tell the US “we understand how hard it is”, while outlining the steps Ireland is taking to get its own house in order.

Irish environmental and developmental NGOs have called on the Taoiseach to provide more clarity on Ireland’s climate policy and to go beyond commitments in the Government’s action plan.

Trócaire chief executive Caoimhe de Barra, who is attending the summit, said Mr Varadkar must clearly signal support for the proposal by president-elect of the European Commission Ursula von der Leyen for the EU to increase its 2030 target to at least a 55 per cent reduction in emissions.

“We are dangerously off track for meeting the temperature limits set out in the Paris Agreement. Governments, including Ireland’s, must take this opportunity to clearly outline how they are increasing their ambitions to respond to this crisis,” she said. “It is these individual announcements and concrete promises to boost greenhouse-gas-emission reduction targets that will define the success of the summit.”

Ms de Barra said it was deeply concerning that Ireland was among those opposed to the EU increasing its 2030 emissions reduction target. “It is unacceptable in light of how quickly we must move to tackle potentially catastrophic climate change,” she said.

She said cyclones had left millions of people facing food shortages in Africa and that drought was threatening east and southern Africa once again.

“The urgency of the crisis is clear but the Government’s willingness to respond is not.”

Friends of the Earth director Oisín Coghlan said announcing a moratorium on new licences for offshore exploration for oil and gas would be the most meaningful action Mr Varadkar could take.

The Government had blocked debate on a Bill that would ban new exploration for good, yet has now written to the Climate Change Advisory Council requesting their advice on exploration policy, he added.

Announcing a moratorium in New York “would be a genuine act of climate leadership on the world stage”, Mr Coghlan added.

He said the Oireachtas had banned fracking and divested the Ireland Strategic Investment Fund from fossil fuels.

“And if the Government follows through on its new climate action plan it will move us off the bottom of the EU league tables.”

He said the blocking of Dáil debate on ceasing exploration does not sit well with this and undermines the Government’s presentation of itself at the UN as a champion of climate dialogue.