Climate strike: Why I'm bringing my kids to protest

One Change: I'll be striking on September 20th with my children as part of the global day of protest 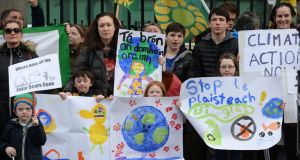 Members of Fridays for Future urging action on climate change outside the Dáil in February. File photograph: Alan Betson

Whether or not you have a reusable water bottle, or sometimes cycle to work instead of taking the car, may seem irrelevant when you consider, for example, the catastrophe of the Brazilian rainforest fires. Or the fact that July 2019 was the hottest month ever recorded on Earth.

Making a connection between the small, everyday details of trying to consume less and the large-scale and frightening events that are happening around us can be tricky. While you’d like to think that the bigger happenings can bolster our daily efforts, they can be disheartening too.

“We’re f***ed either way,” I overheard one woman say recently, during a discussion on the topic, which is one less-than-positive way of seeing things – and could easily justify doing nothing at all.

The term “climate grief” has emerged recently, which sounds a bit dramatic but could very well describe what many of us feel watching large chunks of ice slip into the water. Or seeing the satellite images of vast swathes of the rainforest turning to ash.

What makes the fires in the Amazon so alarming is that this vast natural area is one of the great hopes in helping to tackle the climate emergency. Only by protecting and nurturing this precious resource can it continue to act as a carbon sink. And as the “world’s lungs”, producing 20 per cent of oxygen in the atmosphere, the Amazon urgently needs to be safeguarded.

In his fascinating book, The Uninhabitable Earth, David Wallace-Wells describes what he calls “climate’s kaleidoscope”; the idea that we can “be mesmerised by the threat directly in front of us without ever perceiving it clearly”. There is no doubting that it is difficult to come to terms with the concept of climate change, never mind considering ways to tackle this massive, complex issue. The great Mary Robinson put it nicely when she reinforced the importance of individual efforts, however, saying we need to “make climate change personal”.

That we may feel a bit hopeless every now and then is only reflective of how big a challenge lies ahead. One thing, however, that always makes me feel a little better is seeing the energy and verve among schoolchildren and young people in raising awareness about the environment. And that’s one of the many reasons why I’ll be joining the climate strike on September 20th, with my children, as part of a global day of protest calling for urgent action, and to keep sending the message that this is the biggest crisis of our times.