State moves away from killing badgers and will vaccinate them instead

Badgers to be vaccinated to stamp out TB in cattle 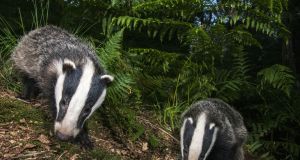 Badgers are to be vaccinated as part of the State’s effort to eradicate tuberculosis (TB) in cattle, Minister for Agriculture Michael Creed has confirmed.

Describing it as a “major shift”, Mr Creed said the decision was “not a silver bullet” but was backed up by “years of scientific research” funded by his department.

The move has been welcomed by the Irish Wildlife Trust (IWT), which estimates that over 100,000 badgers have been snared and shot unnecessarily over several decades, without reducing the spread of bovine TB.

Mr Creed stopped short of ending culling of badgers, but said that vaccination of badgers would become an “integral part” of the plan to eradicate TB in cattle, from this month.

The IWT noted that the development comes 27 years after vaccination of badgers was first mooted as a possible solution in addressing the disease in that animal.

It said that while badgers are nominally a protected species, Department of Agriculture figures show that in some 6,161 badgers were “slaughtered” in 2016, including nursing mothers, and this left young to starve in their underground setts.

“It is high time we saw an end to indiscriminate culling, and especially the barbaric practice of culling during the badger breeding season,” IWT campaigns officer Pádraic Fogarty said.

Mr Fogarty said the ideal would be to follow the example of Northern Ireland, where badgers are caught and tested, and released if they prove to be free of TB.

“Badgers are being unfairly blamed for TB spread, when the focus should be on how cattle are farmed,”he said. The department’s TB eradication programme had been a “costly failure” with a “devastating impact” on badger populations, and the IWT is seeking a complete cessation of culling, Mr Fogarty said.

Mr Creed said that vaccination of badgers would be carried out by staff from his department, beginning in the areas where field trials had demonstrated “the effectiveness of badger vaccination”.

The vaccination programme will apply the Bacillus Calmette Guérin (BCG) vaccine, similar to that used in humans.

“It will roll out incrementally to other parts of the country over time, with vaccination gradually replacing the need to remove badgers,” Mr Creed said.

Bovine TB is caused by Mycobacterium bovis, which can also infect badgers and there has been ongoing debate over the level of transmission back to cattle by the animals.

Mr Creed’s department noted that Ireland is a signatory of the Berne Convention on the Conservation of Wildlife, and is committed to protecting Irish wildlife, and the long-term removal of badgers is “not a sustainable or desirable strategy”.