Storm Lorenzo: What makes a hurricane? 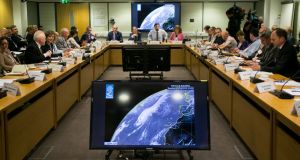 The ingredients that go to make a hurricane are warm ocean water and moist, humid air. They originate as tropical cyclones; rotating, organised systems of clouds and thunderstorms that originate over tropical or subtropical waters –– and are of varying ferocity.

Tropical cyclones forming in the Atlantic Ocean typically move towards the west. Sometimes the winds in the middle and upper levels of the atmosphere change and steer the cyclone towards the north and northwest – ie Ireland and western Europe.

One or two Category 5 storms have formed in the Atlantic each year since 2016 – before that, they were less common. Lorenzo is the latest Atlantic storm to reach Category 5 status, while Dorian, which destroyed communities in the Bahamas last month, also reached that intensity.

Hurricanes are almost as varied as their distinctive names, and vary in strength depending on local conditions and atmosphere over head.

The one certainty is that human-induced climate change – ie global heating – is changing the nature of hurricanes; mainly making them more frequent and intense. They are also dumping more water when making landfall and so causing more devastation in the form of flooding.

Infrared Satellite imagery, you can see hurricane #Lorenzo slowly moving north east, it is expected to transition into an extra tropical storm before it reaches Ireland. pic.twitter.com/pr2fFEKYRl

Remarkably, they sometimes move very slowly; on Monday Lorenzo was heading to the Azores at about 20km/h. Dorian was so slow moving, it parked over the Bahamas for days.

Typically, tropical storms move towards America and then develop into hurricanes. Some of them just fizzle out. Predicting hurricane paths is always difficult, but they usually die out over land, or extinguish themselves when they meet cold waters in an area stretching offshore from south of Newfoundland to New York.

Lorenzo, which is meticulously tracked by the National Hurricane Centre in Miami, is different besides being a record breaker.

No Category 5 storm has ever been recorded as far north and east in the Atlantic.

It was a tropical storm early last week, tracing a northwesterly route from the coast of West Africa. By Wednesday, it was a hurricane. And on Saturday night, it gained Category 5 status.

Since then, it has lost some strength but its path and size remain unique. The storm is very broad, with tropical-force winds covering a span of some 800km.

The nature of the beast

Modelling of the atmospheric conditions gets more accurate within days of arriving at a particular location, so during Wednesday Met Éireann will be in a much better position to predict likely impact on Ireland.

Lorenzo is expected to lose its hurricane status some 1,000km off the southwest coast of Ireland.

Storm Ophelia, which battered the country in October 2017, retained its hurricane status until it was 500km away.

Regardless of status on reaching land, high winds and very heavy rainfall are notable features in both instances.