Higgins urges US to reverse decision on Paris climate accord 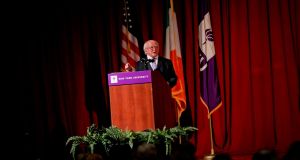 President Michael D Higgins has urged the United States to revisit its decision to leave the Paris climate change agreement, as he argued that climate change is the most pressing issue facing the global community.

In a speech delivered at New York University on Tuesday evening, Mr Higgins highlighted the threat posed by climate change.

“Failure to take radical, urgent action in relation to climate change that will effectively subject future generations to an existence of threat in an ever more bleak and volatile planet, and in human terms one that is likely to lead to the forced displacement of millions of people including those at the front line in small island developing countries,” Mr Higgins said.

He addressed the decision by the Trump administration to exit the Paris accord, expressing his “profound disappointment” at the move.

“I do urge the United States Government to revisit and reconsider this decision to exit the Paris agreement, a decision which could take effect from November next year,” he said.

“Unless we collectively take action to prevent catastrophic climate change, together with a real commitment and transfer of resources towards assisting communities to prepare for, and adapt to, changing climates, these population flows, driven by climate shifts, will take place in a context of old revived and emerging new conflicts becoming available to be exploited by extremists,” he said.

Mr Higgins was speaking ahead of a keynote address to the UN General Assembly on Wednesday.

Earlier, the President said that he believed Ireland had a “good case to make” for securing a seat on the UN Security Council in 2021 and 2022.

Noting that much of the decision-making is made by the five big members of the security council, he noted that small countries have historically been able to effect change on the security council. Noting that about 100 of the UN member states have populations the same or less than Ireland he said: “They are actually the ones who speak on issues like proliferation, cluster bombs, disarmament and climate change.”

Mr Higgins defended his own practices in relation to climate change, as well as those practiced in Áras an Uachtaráin, noting that he planned to travel by ship to Athens and Cyprus in October, while he regularly travels to Belfast by train.

In his speech at New York University on Tuesday evening, he also said that Ireland “believes profoundly” in the United Nations, highlighting how Ireland, like the United Nations itself, emerged from conditions of conflict.

Ireland’s “long and painful” escape from a colonial past means that it can empathise with so many countries in the UN he said.