Greta Thunberg delivers her UN message with urgency and anger

The teenage climate activist was no longer cold and clinical, but seething with anger 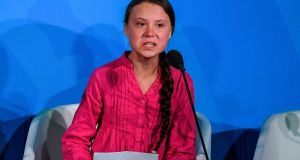 The 16-year-old Swedish climate activist Greta Thunberg is usually a brilliant deliverer of her message: cold and clinical with the ability to stop audiences in their tracks.

She is always short and brutally direct, especially when it comes to pointing the finger of blame at politicians. Hearing her message is invariably an arresting experience – inspiring for her peers, and uncomfortable for her chief target: governments and politicians slow to act in the face of mass extinction of species and ecosystems and rapid heating of the globe, all due to human activity.

The approach, she readily admits, is probably linked to her Asperger’s syndrome; she speaks in black-and-white and only when she believes she has something to say.

On Monday, before the UN Climate Action Summit and an audience of world leaders, she was different. She was clearly upset at the import of her words, so much so it looked as though she might break down.

The clarity of her message reached new heights, notably the utter contempt in her voice when she delivered the line: “We are in the beginning of a mass extinction. And all you can talk about is money and fairytales of eternal economic growth.”

She looked straight at global leaders in the room from some of the world’s most powerful economies and added: “How dare you!”

It was an address of barely four minutes, but there was no let-up: “For more than 30 years the science has been crystal clear. How dare you continue to look away, and come here saying that you are doing enough, when the politics and solutions needed are still nowhere in sight.”

With today’s emissions levels, the Earth’s remaining CO2 budget will be gone in less than 8.5 years, she noted

As usual, her words were backed by sound climate science – she avails of the advice of some of the world’s most eminent experts under the UN Intergovernmental Panel on Climate Change. And she reiterated that nothing short of radical action would be tolerated by her and her supporters stretching to every corner of the planet.

With today’s emissions levels, the Earth’s remaining CO2 budget will be gone in less than 8.5 years, she noted.

“You say you ‘hear’ us and that you understand the urgency. But no matter how sad and angry I am, I don’t want to believe that. Because if you fully understood the situation and still kept on failing to act, then you would be evil. And I refuse to believe that.”

She scotched the popular idea of cutting global emissions in half in 10 years on the basis that it “only gives us a 50 per cent chance of staying below 1.5 degrees, and the risk of setting off irreversible chain reactions beyond human control”.

The contempt was again tangible when she observed: “Maybe 50 per cent is acceptable to you. But those numbers don’t include tipping points, most feedback loops, additional warming hidden by toxic air pollution or the aspects of justice and equity.”

If you choose to fail us, I say we will never forgive you. We will not let you get away with this

And the attempt by the UN to stoke up greater ambition on climate by staging the summit did not escape criticism. She concluded there will not be any solutions or plans presented in line with the stark evidence she presented.

“Because these numbers are too uncomfortable. And you are still not mature enough to tell it like it is.”

She then delivered what was her most ominous political message: “The young people are starting to understand your betrayal . . . And if you choose to fail us, I say we will never forgive you. We will not let you get away with this. Right here, right now is where we draw the line.”

It was a verdict delivered as if she believed she had moral right on her side, backed by many millions of people, young (and older), who are not only upset about the fate of the world, but increasingly angry.