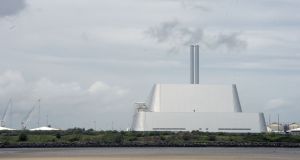 The incinerator at Poolbeg, Ringsend, where a lime leak resulted in 11 people being hospitalised in June. File photograph: Brenda Fitzsimons/The Irish Times

The Environmental Protection Agency (EPA) has initiated legal proceedings against the company which operates the the Poolbeg incinerator following the lime leak last month.

It said the plant was in a position to restart operations after “a number of process modifications and improvements” were made following the incident which resulted in 11 people being hospitalised.

“The plant will start-up on diesel and waste burning will commence thereafter,” it said.

The incident was caused by an incorrectly fitted hopper door gasket from an external contractor.

Covanta, the company that runs the Waste-to-Energy plant, released a statement on Friday outlining the cause, stating the EPA had determined that there was no danger to the public following the incident.

The hopper door gasket refers to the initial entry point for the refuse waste and the seals on that door were incorrectly fitted, the company said.

A combustion unit that was operating at the time was shut down and the lime was contained within the building and did not escape into the environment.

The EPA said it was satisfied that there was no impact on public health or the environment resulting from the incidents.

It said it would continue to closely monitor the operation of the facility to ensure it operated in compliance with the licence.